Thanks for tuning in!

I've been very bad and not blogged for a month or so, but I've been a busy lad so hopefully you'll let me off.

Its been nearly 2 months since I announced that I am taking on the Iron Butt Challenge in 2016 and the Dalton Highway in Alaska before 2020.

The Iron Butt challenge will see me ride the length of the UK from Land's End in the South to John O'Groats in the North in LESS THAN 24 HOURS - The map below shows you my route: 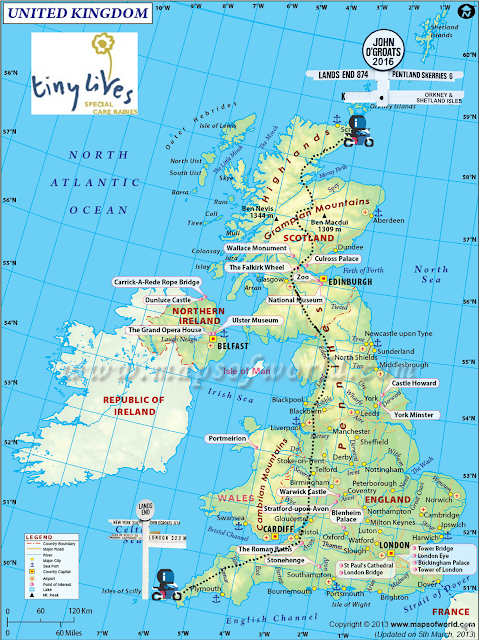 Now not only do I have to ride the 875 in less than 24 hours (300 of which is through the Scottish Highlands), I've also got to get myself to Lands End from my home of Newcastle upon Tyne the day before and back from John O'Groats the day after... its a good job I like riding my bike!!!

I've had a few people ask me if I'm mad... I think the answer is yes. A few people have asked if its possible, which of course it is... but not many have officially completed it which is why I see it was such a challenge. And the great thing for me is that no-one, as far as I'm aware, has done it on the bike I ride, a Suzuki GSX650f... so I might just get into the record books.

So what have I been up to that's caused me not to blog...? Well apart form the usual working, playing a bit of footy, and doing family stuff, I've been starting with my preparation.

I've now officially linked up with Tiny Lives and let them know what I am doing. They are fully behind me and have started tweeting messages of good luck and are helping me with my preparation.

They have also sent me some merchandise to help spread the word!

Also, I've finally opened my giving page. So if you would like to sponsor me for my IronButt challenge, so matter how big or small, then you can do so at the below link.

For a ride like this I'm pretty sure I'm going to have to do some training to be successful. I've been in touch with several seasoned IronButters on twitter with the majority of advice being to practice small and long rides as part of my training. 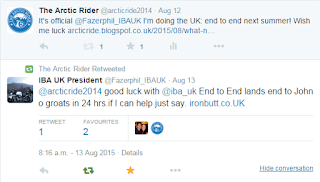 In September I popped up to the South West of Scotland to see some family and completed a 300 mile day. This was just on A-roads and showed me the challenge I'm going to have in terms of losing time if i get caught behind a tractor, hit some road works, or take a wrong turning. More practice needed indeed.

As with my Arctic Ride 2014 I'm looking for corporate supporters to sponsor and support my ride and the charity. I've been trying to work my magic to get some companies on board but nothing concrete yet! If you know of a company that might be interested in being a sponsor (name and logo on my bike and website for a fall fee which goes straight to Tiny Lives) then please do get in touch.

Also I'd like to give a big shout out to Mrs Arctic Ride (my wife Kirsty) who is taking on her own, non-motorbike, challenge to raise money for Tiny Lives Trust. Check out her 365 Miles to Setpember blog here: http://365milestoseptember.blogspot.co.uk/

And that's all for this blog. Slow and steady wins the race (or gets to John O'Groats in less than 24 hours).

Watch out for my up and coming Vlog on Youtube.