Looking back at my Butt

Welcome to The Arctic Rider blog.

Its been a few weeks now since I completed my Iron Butt challenge to raise money for the charity Tiny Lives Trust. Back in my usual routine, I've found myself thinking back quite a lot and thought I better get blogging to let you all know about it. 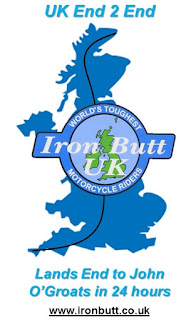 The first thing I would say is that looking back, I'm immensely proud of not only completing the Iron Butt but doing it in 18.5 hours. I got lucky with the weather, the road conditions, and traffic, which really helped. I also need to say a MASSIVE thanks to everyone who donated and supported me. Top job everyone.

Even though I'm proud, over the last few weeks I've been asked (and asked myself) if I would do it again and I think the answer is no... And here is why.

It wasn't fun. I mean it really wasn't fun. I love love love riding my motorbike... Whether its on twisty mountain roads, nipping past towns and villages in the countryside, or even on the motorway getting to where I need to be... but this just wasn't fun at all. Due to needing to ride 875 miles in 24 hours I was in a constant rush. Rushing up the road, rushing at fuel stops, and sometime rushing overtaking... not good. Having such a tight deadline for such a long day really took the fun out. It also meant I couldn't stop and see some of the amazing places along the way, which is usually the staple of any of my motorbike trips. I missed the Wellington Monument, Wye Vally, The Lake District, Stirling Castle... the list goes on. The only point that was fun was finishing and riding with some great company.

Safety is something that I've also been looking back at. Was I as safe riding as I usually am? Certainly in the latter part of my ride from Perth onward I probably took some mild risks overtaking when I wouldn't usually have... I was tried and pressing on. I'm not proud of it. When I'm riding a few voices and phrases sit in my head to remind me how to be safe. One is my big cousin Jen who started riding a long time before me "Don't take risk, simple" something she said before I went to the Arctic and its stuck with me since. Secondly voice sits in my head from my bike tutor Neil from Newcastle rider training. "Do it early" in reference to overtaking. If you see a gap, assess it early and make the decision. One your decision has been made, stick to it. And another of Neil's tips "Only a fool breaks the two second rule" in reference to distance between the vehicle in front. On my iron Butt I definitely veered from these a bit in the latter part of my ride, which isn't good.


I pushed on and didn't look after myself. I didn't look after myself, I really didn't which, looking back was so dangerous, If I were to do it again, I wouldn't ride 500+ miles the day before the ride to get down to lands end. I wouldn't have only a flapjack for breakfast, a sandwich for lunch, and nothing but coke and water there after. I would put on my thermals in Inverness and spent another 10 minutes on the road rather than trying to push on. I'm not sure if it was the tiredness or the blind determination to get the ride done in the time (as quickly as possible) but I was careless and couldn't have really hurt myself on the ride, and after.

For those of you that don't know the days after the ride I was in a pretty bad way. I had a fever, headache, body chills, and the symptoms of a sickness bug. It turns out I have suffered hypothermia due to getting to cold and my body not having enough energy to keep warm. Wow! Not very clever Mr Arctic Rider.

In conclusion, my Iron Butt days are over, for now at least. 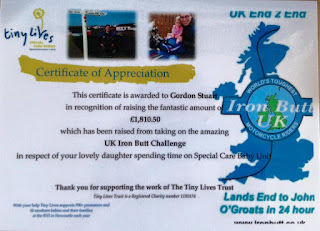 However my charity bike challenges are certainly not, My next job is to get my footage together from the Iron Butt and show all you lovely people my ride in video form. However my progress has been halted due to a corrupt hard drive which is being fixed. So its a waiting game until that is fixed. In the meantime I'll be thinking about where I'm heading to next... more to come on that soon