Greetings from the Arctic Rider,

On this blog, for once, I'll be steering away from my motorbike exploits and talking about some other fundraising I have been doing. Don't worry, I'll soon be updating you all on where I am at with planning for my Arctic Ride Alaska next year :)

Last week I completed my second Great North Run. For those of you that don't know, The Great North Run is an annual half-marathon held in the North East of England. The 13.1 mile course starts in Newcastle upon Tyne and finishes on the East Coast at South Shields. The run is known worldwide and this year had over 57,000 participants, including yours truly.

Now I'm not really a big runner but in recent years I've started running a lot more because:

a) Its cheaper than the gym (more money for motorbike parts)
b) You need less time to pop out for a run (having two young children this really makes a difference + more time to ride my motorbike)
c) Its just about the only time during a week I'm not buzzing around either at work, or looking after the kids, or planning my next motorbike adventure.
d) It has stopped me becoming a 'fat-dad' (a big fear of mine).
e) I find it very relaxing and stress-busting.
f) Its keeping me in shape for my upcoming motorbike adventures.


This year I ran to raise money for Tiny Lives Trust (see 'The Charities' page for more information) who for those who have read the blog before will know is very close to my heart.

Rather than have a separate donation page open, I rolled this up into my Arctic Ride Alaska donation page for those those who think taking on one of the worlds most dangerous roads warrants donation, but me slugging myself 13.1miles along the tarmac of the North East does. Thank you to all those who donated during and after the run this year!! You can still donate by clicking here!


I was lucky enough to spend the afternoon of my birthday at the end of August in the award winning Radio Tyneside studio chatting to Dave Nicholson MBE about my training for the run and my preparations for Alaska 2018. 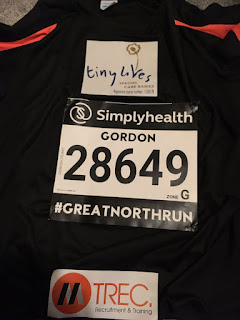 The run itself took place on the 10th of September. The weather was cool with a light westerly wind (perfect for running) but at the start line I felt very anxious about the race ahead. My training this year wasn't where I wanted it to be. I had a string of successive annoying little injuries; A shoulder strain, painful hip flexor (a previous football injury), and a still unresolved recurring chest muscle pull (which is aggravated by running, playing football, and riding motorbikes... typical). Even though I have ran 2 previous half-marathons, this season the most I had managed was 8 miles which, coupled with my injury, caused my anxious thoughts of "Am I actually going to be able to do this".

I decided the best policy was to take a slow and consistent pace from the off and then when I got to 8 miles see how I felt and when it was time to move on. I also had my secret weapon (a whisper chocolate bar) which I would also unleash at mile 8.

I made it to mile 8 at my set pace, ate my whisper, and carried on. It wasn't until around mile 11, once the sugary goodness from my chocolate had hit my blood stream, I decided to up my pace and go for it. The run was so busy however, with me weaving between other runners and getting cut up by an ambulance (annoying, right? :P), that I soon realised I'd left it too late and that I wasn't going to make up much time.

I ended up setting a great pace for my last few miles, setting a personal best half marathon time of 2hr 27m 52s but looking back I know I could have upped my pace earlier to get an even better time.


It was a fantastic experience to do the run! I had amazing support at home from my wife Kirsty, and little Islay and Hugo who I was running for. If anyone is thinking of doing a run for charity, fitness, or any other reason, my advice would be... Just do it!

As the famous saying goes "The hardest step of any journey is the first".

Peace out. We'll be back to motorbikes in the next blog.