Thanks for checking out The Arctic Rider blog.

Whilst I'm planning for my Alaska challenge next year (June 2018) I've also been letting my mind wonder into the future of The Arctic Rider post-Alaska... and, well, I think I've managed the build a monster that is going to keep me busy (and penniless) for a long time..

The Great Arctic Motorbike Challenge is a personal ambition to cross The Arctic Circle in every country possible by motorbike.

I've set no time limit for this challenge.

The land within the Arctic Circle is divided among eight countries: Norway, Sweden, Finland, Russia, the United States (Alaska), Canada (Yukon, Northwest Territories and Nunavut) Denmark (Greenland), and Iceland (where it passes through the small offshore island of Grímsey).

This is how I plan to complete it and become the undisputed Arctic Rider.

As part of my Arctic Ride 2014 I crossed the Arctic Circle in Norway on Saturday 31st of May 2014. You can read about it in my blog post here.

In 2018 I plan to take on The Dalton Highway in Alaska which will see me cross the Arctic Circle during the ride. Read more about 'Arctic Ride Alaska'. 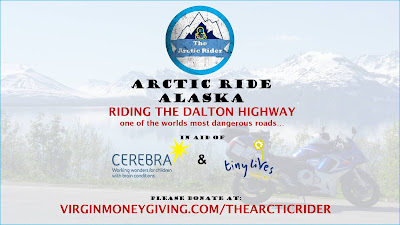 I plan to take on Sweden, Finland, and Russia in one go. I'm frustrated with myself that in 2014 I was so relatively close to crossing the Arctic Circle in these countries when in Norway. I was due to come home from Nordkapp via Sweden and Finland but a large storm and some tasty mountain roads took me back West into Finnmark (read all about that decision from during the trip here) 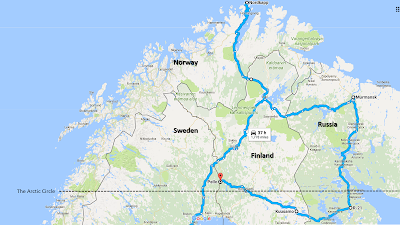 Even if I don't make it within the 72 hours (I'm REALLY hoping to), I'll still finish at Nordkapp which will allow me to head South East to Murmansk in Russia where I can head South to cross the Arctic Circle. One Russia is ticked I'll head West in Finland where I'll turn North to cross the Arctic Circle for probably the 3rd time in 3 days, completing all the Baltic countries on the list.

Iceland is another tricky one. Whilst Iceland gets very cold (hence the name) it only has a tiny piece of land above the Arctic Circle on the Northern Isle of Island of Grímsey (total area of only 2sq mi).

To get there I'll have to get myself and my bike to Iceland (currently a 3 day ferry from Denmark via the Faroe Islands as the best option) and then ride around almost the whole of Iceland to the northern village of Dalvik to catch a 3 hour ferry to Grímsey. Then when I get there I'm literally going to ride less than a mile to pass the Arctic Circle, grab some lunch, and turn around back to the ferry again. I'd imagine if I go to all of this effort to get to Iceland I'd also be going a full tour of Iceland (it would be rude not to, right?).

The other option is to fly to Reykjavik and hire a bike... either way its going to be an expensive trip to tick this one off the list.

And then there was Greenland. The transportation system in Greenland is very unusual in that Greenland has no railways, no inland waterways, and virtually no roads between towns. Historically the major means of transportation has been by boat around the coast in summer and by dog sled in winter. Hmmm.

Greenland is definitely the craziest of all the attempts but as I write this I'm thinking if would be an amazing way to complete the Arctic Octo-Challenge :)
Email Post