My Butt is now made of Iron!

Greeting from The Arctic Rider!

For those of you who follow me on facebook or twitter will know that at around 2315 on Tuesday 5th of July I completed my Iron Butt challenge!!!! It was an amazing feeling to do this on behalf of Tiny Lives but boy was it tough and my body wouldn't thank me after. Here's a first look at my adventure.


In order to do the Iron Butt I needed to get myself down to Lands End to start. So I set off on Monday morning from Newcastle around 0830 for the 500 mile ride down. My previous longest days ride has been on the way home from the Arctic in 2014 when I rode 550 miles through Denmark, Germany, and Netherlands so this was going to be a very big day for me.

The ride down was pretty uneventful. Apart from a few mobile speed cameras keeping me on my toes it was a solid days ride down the motorways with a few stops for fuel and food. The only unexpected part of the trip was the final 80 miles through Cornwall which were very slow due to single carriageways and roadworks. Although I must say the Cornish countryside was delightful to look at and the drivers were very biker friendly, almost every car pulling over to let me filter past... very nice indeed.

I got to the Lands End hotel around 1830, met up with my buddy and cameraman Andi and settled in for the night.

Day 1 - The Iron Butt
I had a really bad nights sleep before the ride. I'd ended up having a late dinner and chatting bikes with Andi so didn't get down to bed until close to midnight. Then all I could think about was the ride and the pressure of finishing within the 24 hours. It must have taken me a good 30-45 minutes to drop off. Then I was up with my alarm at 0430 ready to pack the bike and set off. I was lucky that a twitter buddy of mine, Biker Ian, came along to be my starting point witness and ride through Cornwall.


At around 0530, with the sun already up for about an hour I set off from Lands End with 875 miles ahead of me. I had to stop after 10 miles in Penzance to grab fuel and a receipt for my Iron Butt certification, but after that I was off. The first 100 or so miles seemed so slow with morning traffic and roadworks before getting on to the M5. But when I hit the motorways I was making good progress. 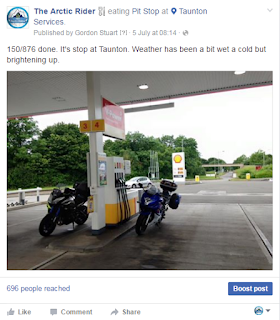 First stop was at Taunton services at 0814 by which I'd already done 150 miles. I got my fuel, wrote up the time and location in my 'ride log' for my Iron Butt verification, grabbed a drink and a flapjack and saddled back up (a president of a routine I would set for all of my stops). Then it was back on the road heading North.

My plan had been to ride 150 miles on each 'eg of the journey but after 'just' another 100 miles my butt was starting to really hurt so I pulled in 50 miles earlier than expected. The motorways were fairly clear and I was making good progress so it seemed sensible to stop and have a short break. Again I did my routine (this time having an apple rather than flapjack) and after about 15 minutes I was back on the road.

I powered back on the up the motorway with ease passing Worcester, Birmingham, Stoke, and Manchester before stopping after 130 miles just south of Preston for lunch. The time was 12.30 and this stop was a bit longer to grab some lunch. I couldn't believe that by lunchtime I'd already ridden 381 miles and I wasn't even half way. When getting ready to head off an old man came and chatted to Andi and I for 5 minutes or so and it was a really nice break from the riding. 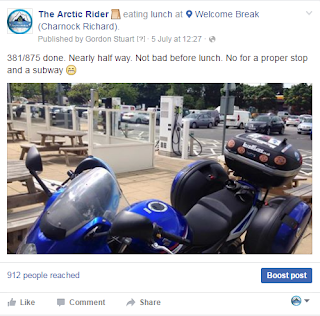 Again it was back on the road up the M6 towards Scotland. One of the pluses of the ride was certainly seeing the different scenery of the UK along the way and seeing the Lake District from a distance was great.. although I was very jealous I wasn't heading there to ride some of the twisty roads and overtake some campervans.

Next stop was Gretna, just inside Scotland and (finally) over half way through the ride. By this time it was 3pm and I'd ridden 493 miles. My arse was getting really sore by this point and was the main reason for me not being able to push on further. I think it was around this point I really realised why they call it the 'Iron Butt'.
When I got back on the motorway I remember thinking "I'm in Scotland now... I'm getting there" but the reality was I still had 350 miles to go and the motorway was running out. The M74 to Glasgow was empty and fast. It twisted through the hills and before I knew it I was heading into Glasgow and on to Stirling.

After passing Stirling I was greeted by the amazing right of Stirling Castle and the Wallace Monument. I love Scotland... I really do.

Next stop was near Gleneagles just West of Perth, 120 miles since my last stop. The motorways had run out and average speed cameras and the first signs of tiredness were slowing me down. It was 5.17 and I'd already ridden 613 miles, offically my longest days riding, but I still have over 250 miles to go. The task of doing the Iron Butt was really starting to hit me at this point but throughout the day I'd had more and more likes and messages coming through on facebook and twitter and they really made a difference. And to know 1,000+ people were seeing my posts was a very humbling feeling which gave me great motivation to get back on the road and keep heading to John O'Groats 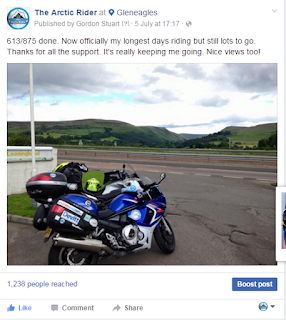 Next was the A9 from Perth to Inverness which was very slow progress and pretty cold going over the mountain passes.

I arrived in Inverness a few hours later cold and hungry but greeted by the smiling face of my twitter and youtube buddy XTWanabe. From Fort William, he'd rode over to meet me in Inverness and ride the final 130 miles (3 hours) to John  O'Groats. 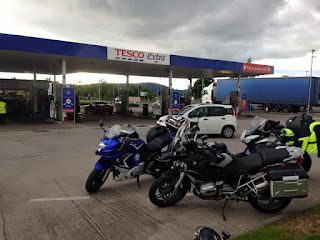 This is when it got really tough. I had loads of messages coming through telling me I'd done so well and how close I was but I didn't feel close at all. 3 more hours on the road seemed like a lifetime and my body wanted me to stop and rest but I knew I had to plough on.

If I'm being truly honest, this is where my riding attitude changed from my usual mantra of 'ride safe' to 'lets ride this fast to get there'.

I was riding into the sunset but over the passes it was getting very cold and I didn't put my thermals on. I was feeling so tired but all my mind was thinking is "I've got to do this no matter what" so I pushed on. I made a short stop 10 miles from Wick after I felt my concentration go but the 5 minutes of chat with Andi and XT was enough to get my focus back and I went on.

I stopped at Wick to get my final receipt for my Iron Butt certification then to the final few miles onto John O'Groats. 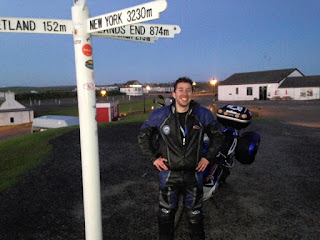 It was a great feeling pulling into John O'Groats. I felt so proud I was completing my ride and very humble for all the love I had received.

My buddy XT filmed the final few minutes of my ride which you can watch below.

So all in all it was a successful but very stressful day of riding. Also it turns out some of my decisons around not eating enough on stops and riding in cold temperatures saw me develop hypothermia on the final hours of my ride. I kept pushing on but the result was a very sick Gordon for the few days following the ride.

So would I do it again? You'll have to wait for my next one to find out that, and my 'look back' on the ride.

So far i have raised over £1,600 for Tiny Lives. If you would like to donate please visit www.virginmoneygiving.com/thearcticrider