Thanks again for reading my blog.

Its been a rather quiet week on the Arctic Ride front, although I've still been thinking about ideas and the trip in general a lot.

The biggest thing that I have been doing this week is putting together a sponsorship prospectus. I'm going to use this as a sort of project plan to present to local companies to try and gain sponsorship both for going towards the Charity and helping to fund my trip. In 2011, I was lucky enough to gain a travel bursary from my university to help fund my trip but my own personal costs were very high so by getting companies involved it gives them a chance to advertise through the media I am doing for the trip but helps me fund the trip also. Its a bit of a difficult one because the costs of doing a trip like this are relativly high but the benefits,i.e. the money raised for the charity, is also very high. It sort of epitomises the phrase 'you've got to spend money to make money' and I feel as though the potential for my Arctic Ride 2014 is twice or three times what my ride in 2011 was where I raised £1,800 for Cerebra. The reason I think it has this potential is that I've had a lot more time to plan, I've had experience in doing it before, and I've got a team of people behind me this time helping me out, rather than just me and my enthusiastic fiancee of the time, now wife Kirsty.

So maybe this is the point where I should share some of my ideas about why this trip is going to be bigger and better.

Twitter - I've started a twitter account to help keep people up to date with what I'm doing, and raise awareness among a wider audience. If you haven't followed me already, please do @arcticride2014

Videoing the trip - This time I'm going to film the whole thing, I've already started in fact. At first the idea was just to document my trip so I could show my children and grandchildren what a I did. However after discussion with several folk, the idea kind of snowballed and now the plan is to film the whole thing as a documentary and then have a screening a few weeks after I have returned. This way I can try and raise further money for the charity and get even more exposure for my trip and my sponsors. Also, I will be able to invite my sponsors and any other key stakeholders along to say thanks.

After party - A week after returning from my last trip in 2011 my Kirsty organised a surprise coming home party with some local bands playing, a raffle and some delicious food. This time, as we have more time to plan, the after party is going to be even bigger. Again this gives me the opportunity to invite everyone along who has donated, or helped in anyway to say a big thank you. Also there will be further opportunities to raise much needed funds for Cerebra.

So that's what I've been doing this week. Also I was lucky enough that the weather cleared up on Saturday and I had a suitable excuse that one of my pals is looking to get a bike to get my new bike out onto the road for a wee spin. All I can say is that it was an absolutely delightful ride. Smooth through the gears, more than enough power to sneak away from a Merc SLK on the coast road, very comfortable and I hardly even noticed I had someone riding pillion. All in all I feel I made a right choice purchasing the GSX650F and I feel that its more than up to the task of carrying me and my backside 6,000miles to the top of Europe and back next year. Thumbs up indeed. 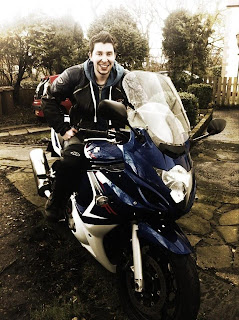 That's all for now, thanks for reading and please share this about for others to get an understanding of what I'm doing and the whole reason why I'm doing it - to raise money for brain injury charity Cerebra who help brain injured children and their families and who have given my wee bro Robbie and our family so much support over the years.

Thanks for reading and ride safe.