Wowza... what a week its been since I last took to the keyboard. No sooner had I announced last Sunday that I was planning my trip to the arctic, I've now purchased a new bike.

As discussed in my last post, for the past few months I have been looking for a new bike but it was always my intention to sell the ER5 first and then start 'really looking' rather than the browsing I had been doing. I knew that I wanted something bigger and more powerful than the ER5 but it took me a while to create a shortlist of bikes that were actually realistic for my riding style, budget, and for riding long distance. Over Christmas I went for a look at some bikes on Westgate Road in Newcastle where most of motorbike dealerships are with my biker/navy buddy Bernie (who, for those that followed my last trip, lent me some heated gloves and socks, as well as riding some of the first day with me). During this visit I realised that a super bike most certainly wasn't for me after I sat on one in the showroom and after only a matter of seconds started to get a sore arse which made me ponder what 300+ miles would feel like. After sitting on and looking at a few bikes I had narrowed it down to a Suzuki GSX650F or a Honda CBR600F. Both sporty but more comfortable machines that were in my price range. There was even a CBR in one of the showrooms and after 10 minutes negotiation over the price I walked away from the deal after the salesman wouldn't go below £2,399 for the 1999 plate Honda with 20,000 miles on and needing a new back tyre (this info will come in handy later) and I'm so glad I did.

Fast forward to Sunday 3rd March 2013 and after returning from a weeks holiday in Poland with Kirsty (and aye it was freezing) we was catching up with my emails when Kirsty noticed that on her ebay account one of the many bikes I had been 'watching' had been re listed. I checked out the advert and I almost couldn't believe it. A bike I had been tracking since the start of the year had been dropped in the price for the second time. It started at £3,200 which caught my eye as most of the other bikes of that type with similar condition,mile and age were all starting at around £3,700 however I refrained from bidding as I hadn't sold the ER5 and although it was a good price it was located in Cardiff. At the first price no one had bid on it so it was re-listed starting at £2,600 and again even though a great price the location and still having the ER5 prevented me from bidding. Then, when I returned from my holiday, it has been dropped to £2,200 'priced to sell'.. now just to state what a good deal with it, lets compare to the CBR I spoke of early. This bike was a 2009, with 12,000 miles on and need a new bake tyre, and was on at cheaper than the CBR which was 10 years older and had 8,000 extra miles one (thats 1.3 trips to the arctic) bargain indeed. Anyway, after chatting with Kirsty and getting a second opinion from Bernie I phoned the owner to ask a few questions and get more info... while I was one the phone two bids on ebay had already been received and it was up to £2,300 and there were lots of people tracking it. Now I'm not normally one to make rash decisions but this was an opportunity too good to miss, so after consulting my personal financier (Kirsty), I decided I would make an offer on the bike and put the ER5 up for sale immediately if accepted.

Anyway, the short story is that we agreed on a price with certain conditions (i.e. if I got to Cardiff and it was actually a moped and not the bike in the photos I wouldn't buy it). So I booked my train ticket and decided that the next Saturday I would go view and hopefully pick up the bike and ride it home.

It wasn't until about the Wednesday that I had realised what I was doing... I was going to be getting a 6hour train at 6.30 in the morning to Cardiff, viewing a bike and then riding it 330 miles home and without having my dad or another sensible biker person with me. Although it does sound like something my dad would do (he rode his new Harley from Newcastle to France in the snow and ice last winter) but that's not the point.  I was also rather nervous as I had never ridden the bike before and I was out of practise riding long distances.

So on Saturday morning I got up at 4.30am, got all my bike stuff together and walked along to catch the metro to the station where I had a 6 hour train journey to Cardiff to deal with before going to a view a bike that I still hadn't seen in the flesh. Then a further complication had been thrown into the mix. The crappy British weather had been decided that for the second half of my journey home from around Nottingham to Newcastle it was going to snow, or so the met office had said. 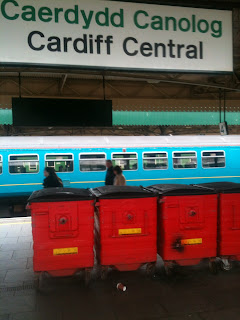 As you can see from my picture I arrived in Cardiff (and quite clearly I need to brush up on photography skills before next summer so I don't end up with bloody bins in all my photos), jumped in a cab and arrived at the guys house. Armed with a checklist of things to check on the bike, I inspected it, the paperwork and manner of the chap selling and came to the conclusion it was a good deal... I even managed to get a extra £20 off which paid for my fuel home, woohoo!

Enter my new Suzuki GSX650F seen below at Asda Cardiff ready to be filled up and ridden home. 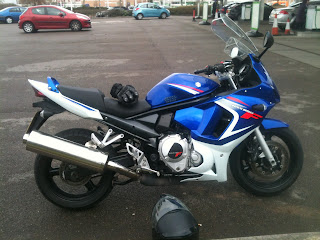 This photo most certainly highlights the high point of my day. I set off from Cardiff in very cloudy conditions and after a windy ride over the Severn bridge it started to spit which then turned to rain around 100miles in near Birmingham. I braved another 70 miles and after 2 and a half hours on what I can only say is a very comfortable seat I pulled over to refuel and grab myself some scran. Although slightly damp I was feeling more positive that I would make it home in good time and in reasonably good condition. How wrong I was. Not long after setting off on my 2nd leg it started to absolutely howk it down, to the point where my waterproof suit was starting to get wet and my gloves and boots were soaked. Then, enter nightfall and a freezing easterly wind. The riding conditions were what I can only describe as unpalatable and even though I've ridden many a day in the rain, the temperatures were unbearable and after only 60 miles I had to pull in at the services and warm myself up. I struggled on the for the last 100 miles and arrived home safely although felt like I had frost bite on my fingers. I was thankful thought that the met office were wrong and I didn't get snowed on. 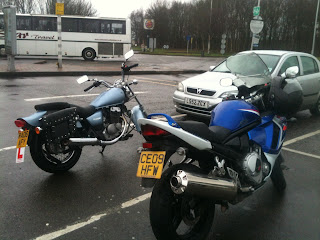 So that my new bike... crazy stuff I know. I certainly didn't see it coming but I guess that's the way the best and worst things happen in life. And, getting back to the whole point of this blog, this is the bike I'm going to be using for my trip.

Now for the full update on where we are at with the planning... haha just kidding. Not much has changed in terms of planning but we have been writing down more ideas and trying to build up a twitter account which is being run by my lovely wife Kirsty. Please follow us @arcticride2014. Having lots of followers will help with my getting sponsorship from companies so any help is appreciated. Also, I'm getting close to a draft route which I will publish this week so watch this space.

That's all for now, thanks for reading and please share this about for others to get an understanding of what I'm doing and the whole reason why I'm doing it - to raise money for brain injury charity Cerebra who help brain injured children and their families and who have given my wee bro Robbie and our family so much support over the years.