Wow... what a 10 days or so its been since I last blogged. Sorry there was no blog on Sunday. I had a very busy day promoting Arctic Ride 2014 at the Bikewise show in Durham. More to come on that in a separate blog though.

The reason for the delay in blogging are aplenty. First of all I've been trying to move house and on Saturday morning I encountered a massive issue which caused Kirsty and I to spend the whole day looking for a new house. This then saw us prepping for the Bikewise show until 11.30 pm! Which is never fun when you have to be up at 6 am the next day. Then of course there was Bikewise all day Sunday. I thought on Sunday evening that I as I'd had a stressful day that I would do my blog on Monday evening... WRONG AGAIN Gordon... the luck gods had obviously decided I needed to be brought back down to earth after my fine day at Bikewise and decided the best way to do this would be to make the clutch on my car break on the way home from work... 4 hours later (9.30pm) I finally got recovered back home.

So as my car is out of action the only way to get to work was on my trusty Suzuki... now this isn't a bad thing at all but those luck gods tried to punish me again on Tuesday morning. Getting ready for work I packed up my pannier boxes and Kirsty came out to help me fit them to the bike. Stupidly I had put my bike on the side stand on a slight slope... so as I fitted the righthand side box (which was full) it pulled the bike upright off the stand and then the slope carried the bike forward! Luckily Kirsty shouted that the bike was moving and I managed to grab a hold of it by the topbox to stop it falling while Kirsty straightened up the the handlebars before I shimmied round and put it back on the stand.... then the same thing happened again! So I put the bike on flat surface and let me heart stop racing.

And to top it off... today (Wednesday) my iPhone died for no reason and wouldn't turn on so I couldn't ring around garages getting a quote for my clutch work (1st world problems I know but its still been a very frustrating week).

So back to what happened before the weekend. I spend most of the week organizing the stickers for my bike while Kirsty order some Arctic Ride baking supplies (you'll have to wait for the Bikewise blog to see those though). I ordered the stickers towards the start of last week to allow them to arrive on time and they finally arrived on Saturday. 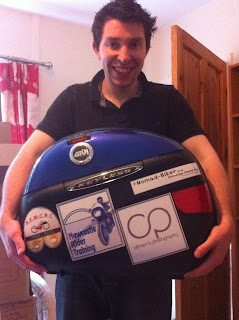 As I write this blog my cat Cleo decided to jump on my shoulders as she wants come food. Haha! Arctic Cat. 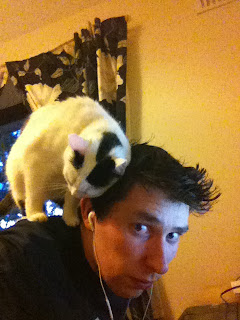 Thats all for this week. Big thanks to Sandra who donated to the total this week!

What out for my blogs later in the week on Bikewise and Cerebra bear!

Please keep spreading the word about my trip.

Donations - With 100% going to charity CerebraCLICK HERE TO DONATE