Day Three - Did you say first right or second?!

I have just been speaking to a very tired and weary soul..he has arrived and found a campsite in Neumunster http://www.familien-campingplatz.de/ which is about 59 miles south of Flensburg. When he arrived, he thought that it was closed but luckily and due to some gestures, he managed to contact the owner and even procure a bottle of water to make his pasta with.

He rode 386 miles today taking him from Holland to Germany.Although he was supposed to be in Flensburg now he came accroper through the mean streets of Amsterdam and Hamburg where he got really lost! Having the amount of stuff he did on the back also meant that he couldn't filter through which I am sure is a pain for him!

He said that the autobahns are mad with people going at all sorts of crazy speeds and that little bluey is coping but has to take a bit of a run up before overtaking. He has seen 2 accidents today and now is on his own completely. His dad left him this morning heading back home to France.

One thing which made him giggle today was the German number plates because they have 3 letters at the start he saw one that said BUM.. i mean how immature..lol He also said that in general the riders in Holland are more friendly and tend to wave at him as they pass by sticking their leg out but so far to date there have been no leg wiggles from the Germans..those stornch lot!

On the plus side, he has found that the fuel is cheaper in Germany compared to Holland which is a good thing as it means he can buy an extra large Frankfurter as a reward for all that riding. lol

The plan for tomorrow is still being finalised but as he is so tired I suggested morning coffee in Flensburg and lunch in Middelfart..lol..it still makes me giggle even if the local dont appreciate the hilarity of it! So we will see where he ends up tomorrow and what fun he has then.

The minor celebrity status has been re-inforced today with another article in the Chronicle which I have put below just in case you don't live in the Whitley Bay area. 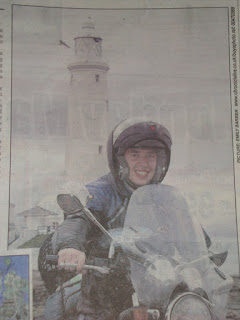 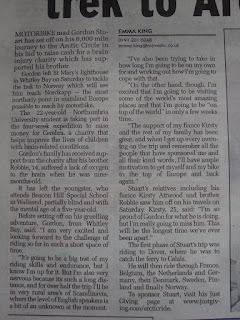 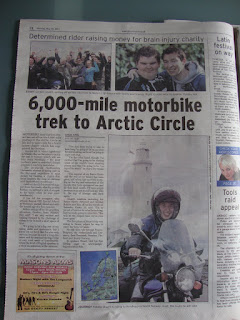 On a more charity type note, I think it would great morale for Gordon to get him to his target before he reaches Nordkapp. We are now up to £980 so not far off. Please people, if you think about what he is doing and how amazing he is and how much you probably dont need that extra pint, you alcoholics, please put that money into the pot and donate.

If anyone has any messages they want me to pass onto him, please text/facebook or carrier pigeon me and I will pass them on.