Greetings!
Welcome to day 4 of Arctic Ride 2014.
Today I've ridden another 360 odd miles from near Malmo in Sweden to Norways capital Oslo.
I started the day on a bit of a downer. I has a sh..ocking nights sleep and got a bit of bad feedback about my trip. After being pissed off and feeling sorry for myself I had a look on facebook and twitter and saw all the support and well wishes. And I pretty much decided.. Stuff the 1 negative person.. I'm doing this for a reason and I'm going to ride my bike to the Arctic.
I set off fully loaded up the motorway. Today's as progress was hampered slightly but not being on the autobahn and the notorious Scandinavian police find.
The weather was sunny but cool ad windy so I stopped after 120 miles rather than 160 to warm up. It was here Brian and I grabbed a sandwich and saw a woman drive up to a petrol pump on a lawnmower, fill up, and leave :s not what i usually see at the pumps in whitely bay. Usually The most entertaining scene is a charv trying to figure out what a litre is. Luckily I good some footage (me chuckling in the background) of said woman and it will be going in the film.
I stopped again when I got to Norway where I was met by a half Norweigen half Polish man who was interested in my bike.. And my wallet :s he kept saying... You must have loads of money to have a bike like that able be here... I soon used my 'I off to meet my mate' line and escaped.
No so much of a lie, but I wasn't meeting my mate Hans for another 4 hours.
I found my way through the Oslo rush hour to my campsite only to find it's not open until June. So I trebled across the other side of Oslo, again through rush hour, to another campsite. 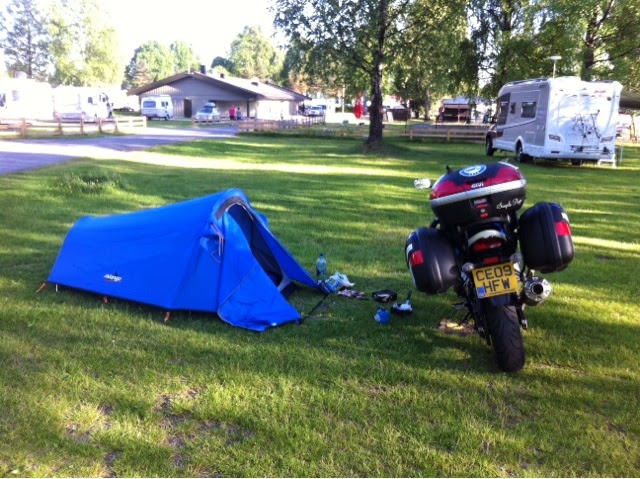 I got my camp set up and cooked some pasta and sauce, this time with sausage :)
My friend Hans from Oslo then paid me a visit and we checked over my route. Turns out the next stretch if road is all road works so he recommended a snowy mountain pass instead which he is going to ride with me. 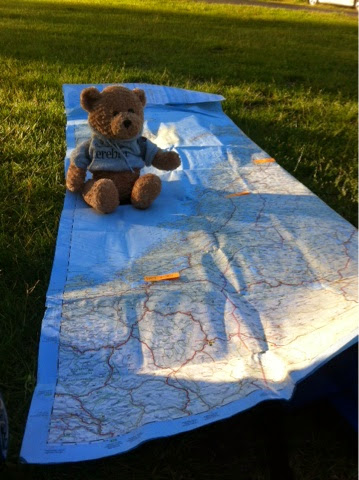 Thanks again for all the support and sorry for any spelling mistakes (it's hard just on an iPhone). If you want to hear anything on these blogs just message me and ask and I'll include it.
Tune in tomorrow to see how cold I got up the mountain!
Ride safe.
Gordon
Email Post