Day two - Dover to the home of the Autobahn :)

Kirsty here. Just in case you don't know me (and if you don't..shame on u.. tee he he), I'm the wife of Gordon, arctic rider. He doesn't have wifi and spending most of his days on the back of his bike to complete his challenge of riding 6,000 miles from Newcastle upon Tyne to Nordkapp in the arctic circle (and back.. hopefully.. ) So he will be trying to write some blogs and social media updates and I will be helping with others. We speak to each other each night and he updates me on what goes on so that I can share it all with you lovely readers. :)

So day two saw Gordon travelling from Dover, UK, across the channel to the continent through France, Belgium, Netherlands and finally to Germany.

He had a very early start getting the first ferry across to Dunkirk and had got a link with a production company in Dover who were going to help him with some filming but unfortunately the guy's car helping him broke down, (hope its sorted now) and he literally missed the boat.. he he so he went stag! ( for the first time in 6 years.. ;) 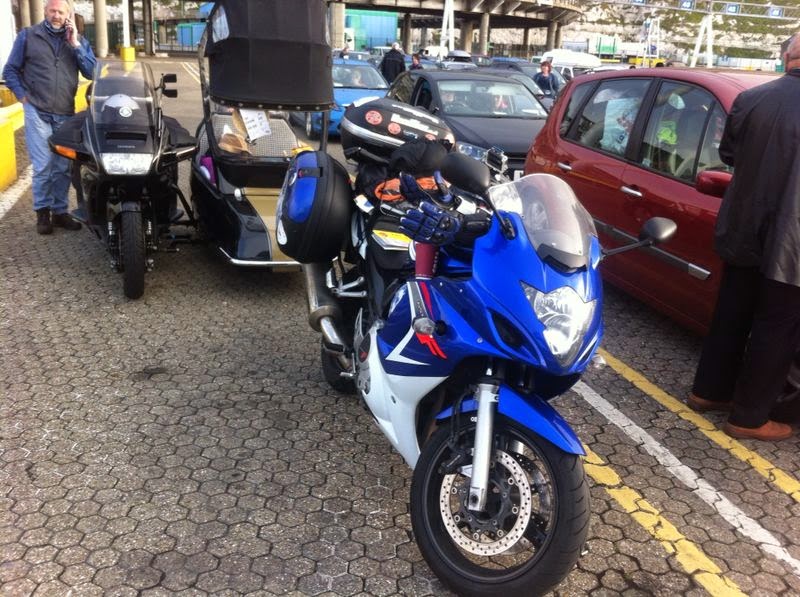 He had a great time on the ferry and was given access to the VIP lounge (i think he pretended to be Charly Boorman... lol) This gave him the opportunity to catch up with some social media and grab some free tea and coffee and re-charge himself before the long day ahead! :) The only thing he thought was strange was that instead of the deck - strapper down-erer guy strapping down and securing his bike.. Gordon was thrown the strapping and had to do it himself.. well nothing is totally for free these days!! lol

Unlike day one, the weather was glorious and not quite as monsoon-like as it had been in the UK.. let's just hope that he remembered to put sun cream on that Scottish pale skin... or else I will have a lobster-like hubby and as I'm pregnant, I cant have sea food!! ha ha ha ha

Also, as it was Sunday, he said that traffic was light and so he managed to travel 410 miles in total and still arrived in sunlight.. something he wont have to worry about when he gets almost 100% daylight as he gets further north! He wasn't supposed to be doing that amount of mileage.. but he managed for the third time to get lost in Eindhoven.. he claims its the lack of signs.. but I just think his gord-nav hasn't fully warmed up! :)

His final resting place (for the night... he's not dead..lol) is Lembruch in Germany. He is about 500m from a lake which is nice. :) Its a cheap campsite (1 euro per night), but the only problem is that the owner has left for the night and so he doesn't have a key for the showers.. (i can almost smell him from here..and that's without my super sensitive pregnancy nose.. lol) I suggested that he has a bath in the lake but i guess he is worried about das loch ness monster (the German version).. (yes i did make that up.. although it is also prob on Wikipedia.. lol) He is hoping that the guy will be back early so that he can use the facilities before leaving in the morning. 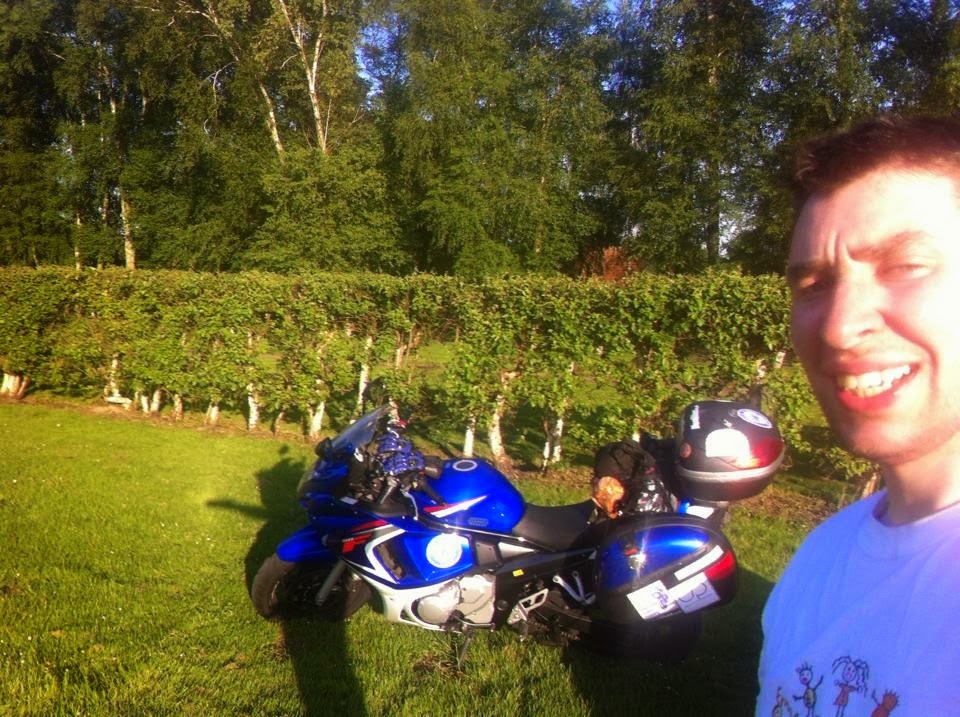 The other problem he had this evening was that he has forgotten to take matches.. this means that he can't light his stove.. cheese and pittas and a club bar (biscuit covered in chocolate for all those non-brits out there).. oops.. this is the one time it would be a healthy advantage to smoke!! Although he didn't seem to eat well tonight.. he said that there are plenty of bugs who have been biting him... they obviously have good taste!! he he

He's also been having some banter or crossed wires with a German caravan type guy who didn't totally understand him.. not surprising with Gordon only knowing phrases such as 'Where is the train station' and 'two beers please'.. prob didn't get him too far! lol

The plan for tomorrow is to travel to Sweden.. this should be around 464 miles to a place called Landskrona so watch out for the next update!

That's it for tonight folks!!

If you haven't and would like to sponsor Gordon on this epic journey, please go to www.virginmoneygiving.com/arcticride2014

Check back tomorrow for more adventures and Ride Safe Gordon!