Welcome the blog for (day 5) and Day 6. I’ve combined again due to poor internet connection and the fact that Day 5 wasn’t that interesting.

Day 5 was an odd day. I awoke about 0530 in my shared bunk room. I had a pretty bad sleep as the doors on the room were saloon style (with no lock) so every sound and light came into the room. I waited until 0800 when the restaurant opened and got myself a banana and a cup of tea to start the day. I pretty much just plodded on as per the day before. Being stuck on a ship for two days, podcasts and reading become your best friends. 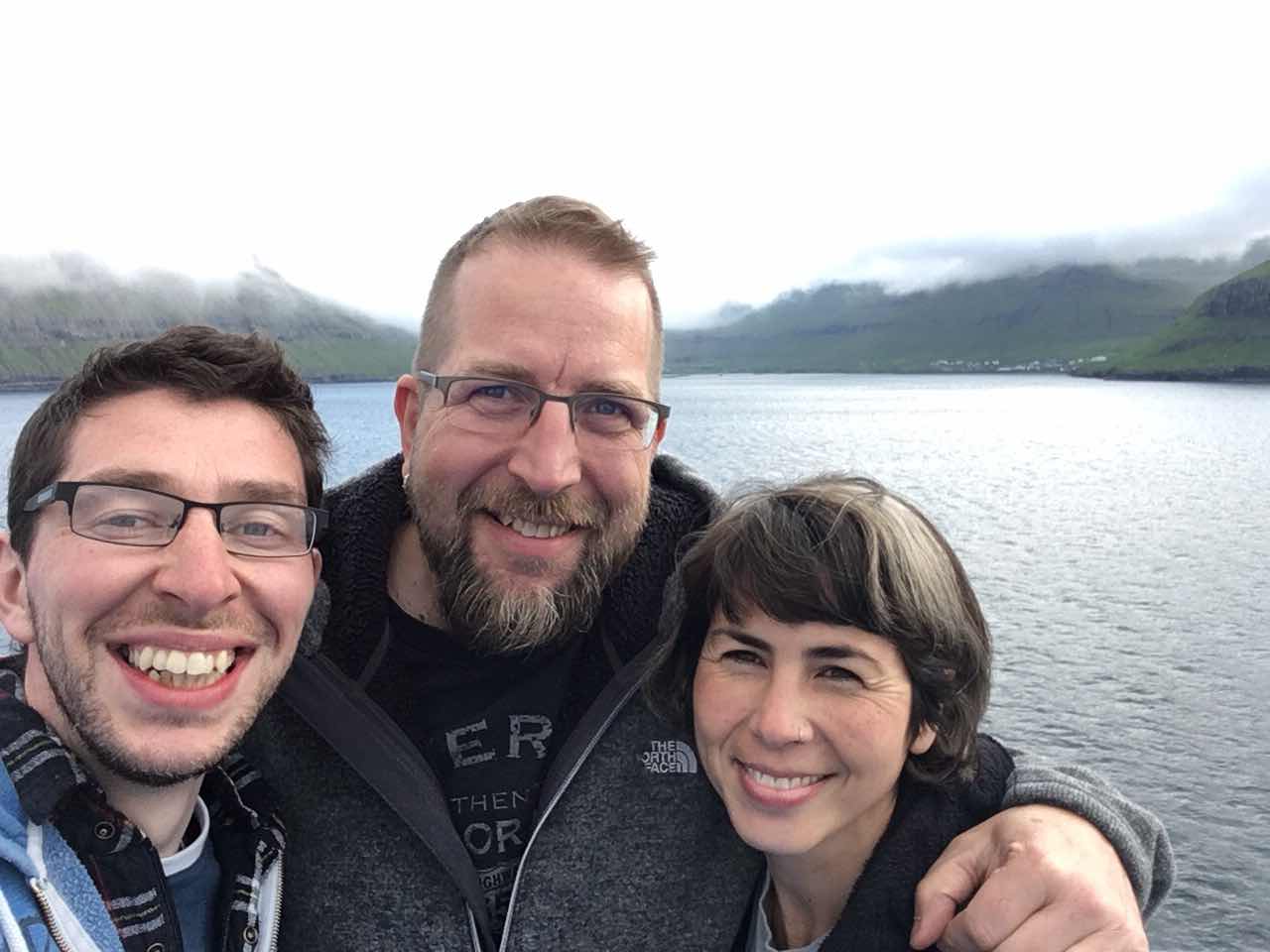 U
Fareo Islands in the background with Jon and Ming.

I bumped into quite a few other bikers onboard including Jon and Ming who were on the Harwich - Rotterdam ferry. We had a bit chat in their cabin about music and bikes, and they invited and treated me to dinner in the evening too which was very kind. Apart from that I took some photos of the Faroe Islands when we passed through and also tried to do a Facebook live video. Apart from the chat, it was pretty dull and I can say for sure I’ll not be signing up for a 2 day sea crossing in a hurry anytime soon. 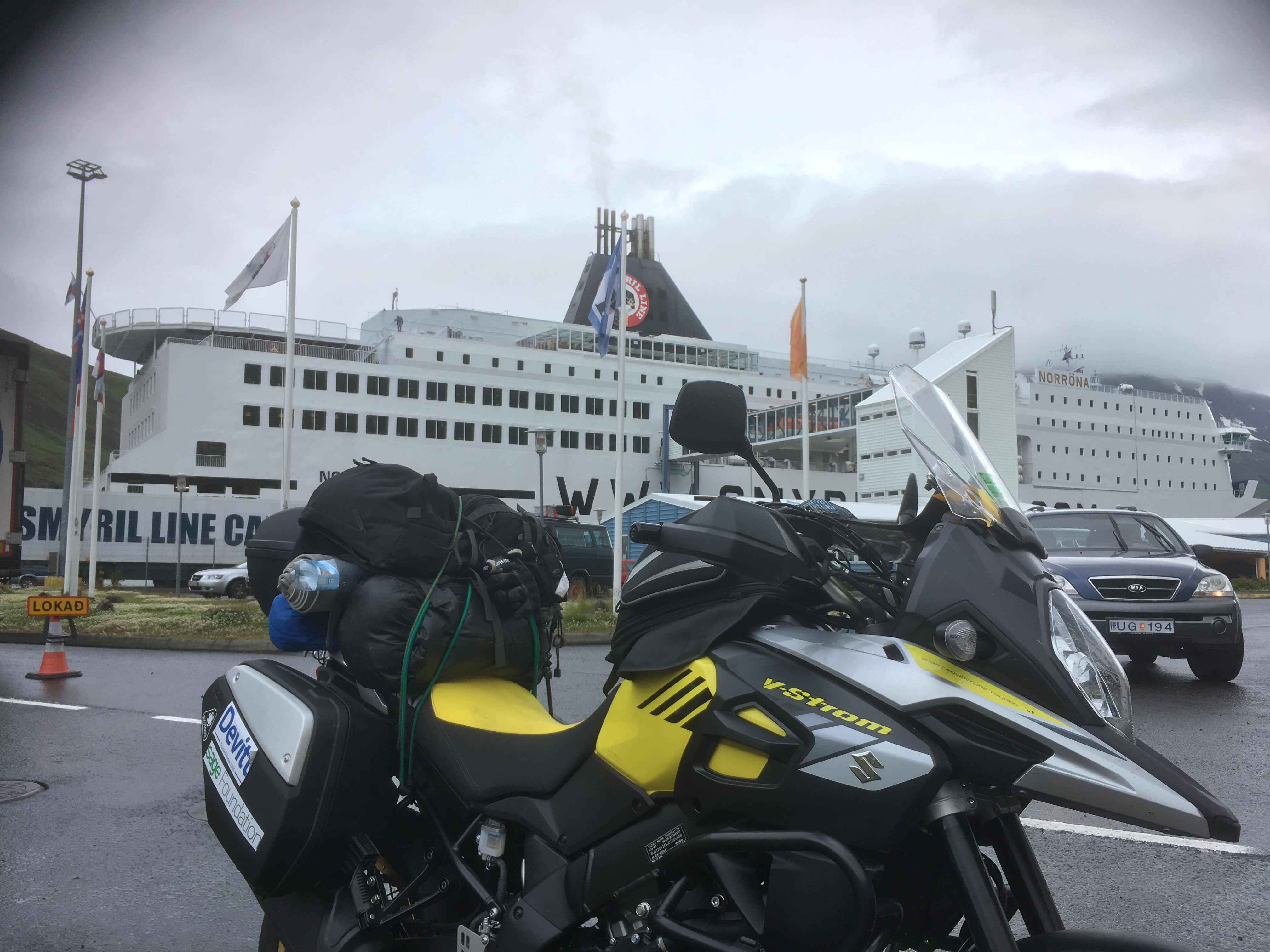 Day 6 - I woke up early again, had a shower and got my kit packed away. It was long before we were sailing through  a magical fjord coming into port. With 30 minutes to go before docking, I headed down to the car deck to repack my bike. Before I knew it I was rolling off the ferry and onto Icelandic soil. It felt like a dream come true and I was so excited, although it didn’t last long.

For the past few days I’ve been trying to contact the shipping company who runs the ferry to the Arctic Iceland island. Emails hadn’t worked so I decided to phone them when I hit dry land. I got no reply and after some advice from tourist info, it become clear I was going to have to go and get my ticket in person at the port of Dalvík before tomorrow’s ferry. The only problem was that the office closed at 4pm and it was over 300kms away. It was going to be right down to the wire.

I had planned to visit some sites en-route to Dalvík but thanks to my new milestone, I just had to smash out the miles. The weather forecast had been for showers but I was not prepared for what was ahead. 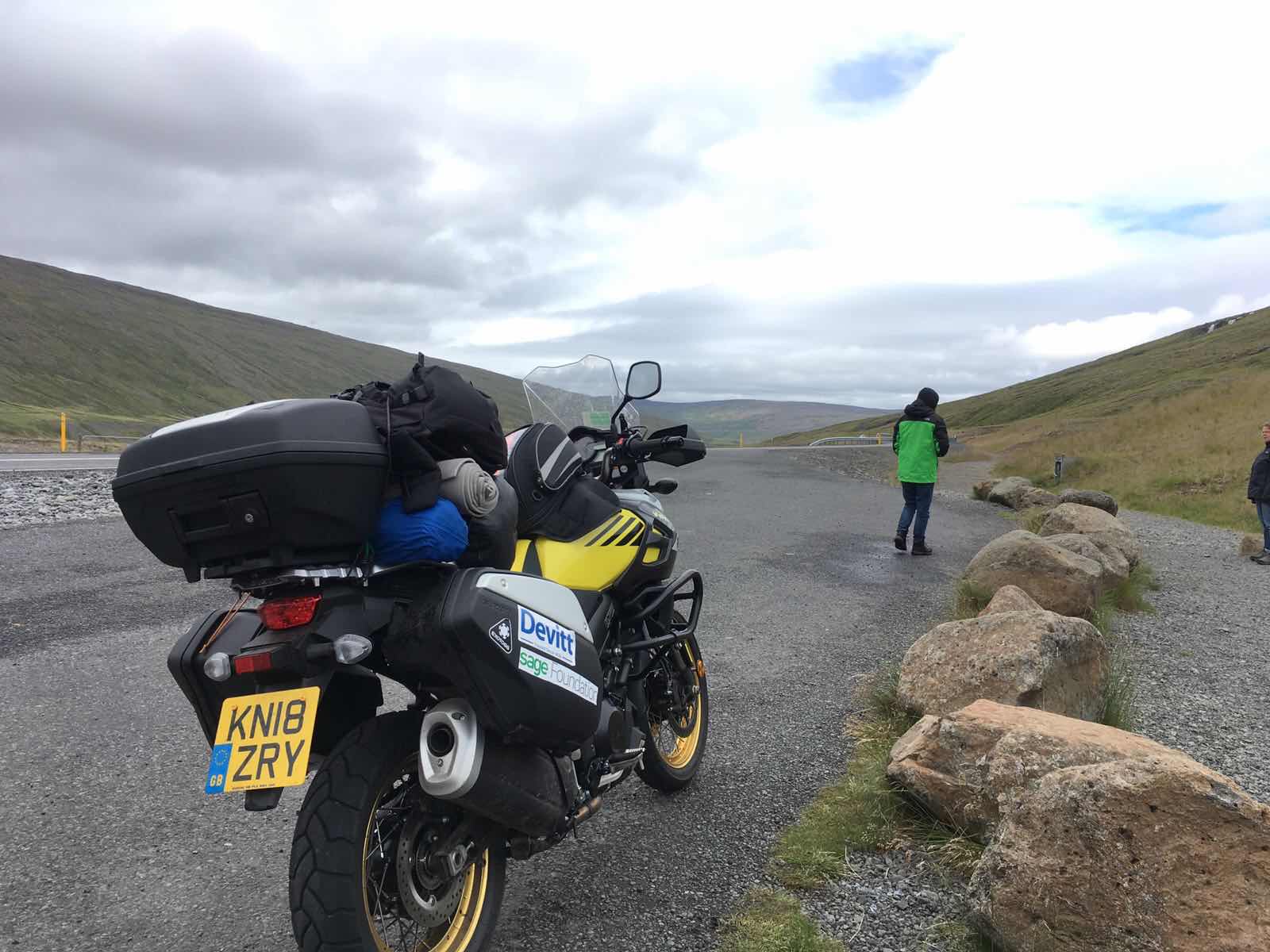 When I set off from the port there was a light breeze, about 13 degrees and spitting with rain. By time I got into the counties route 1 ring road, the temperature was down to 6 degrees, the rain was in full flow and the wind was blowing a gale. 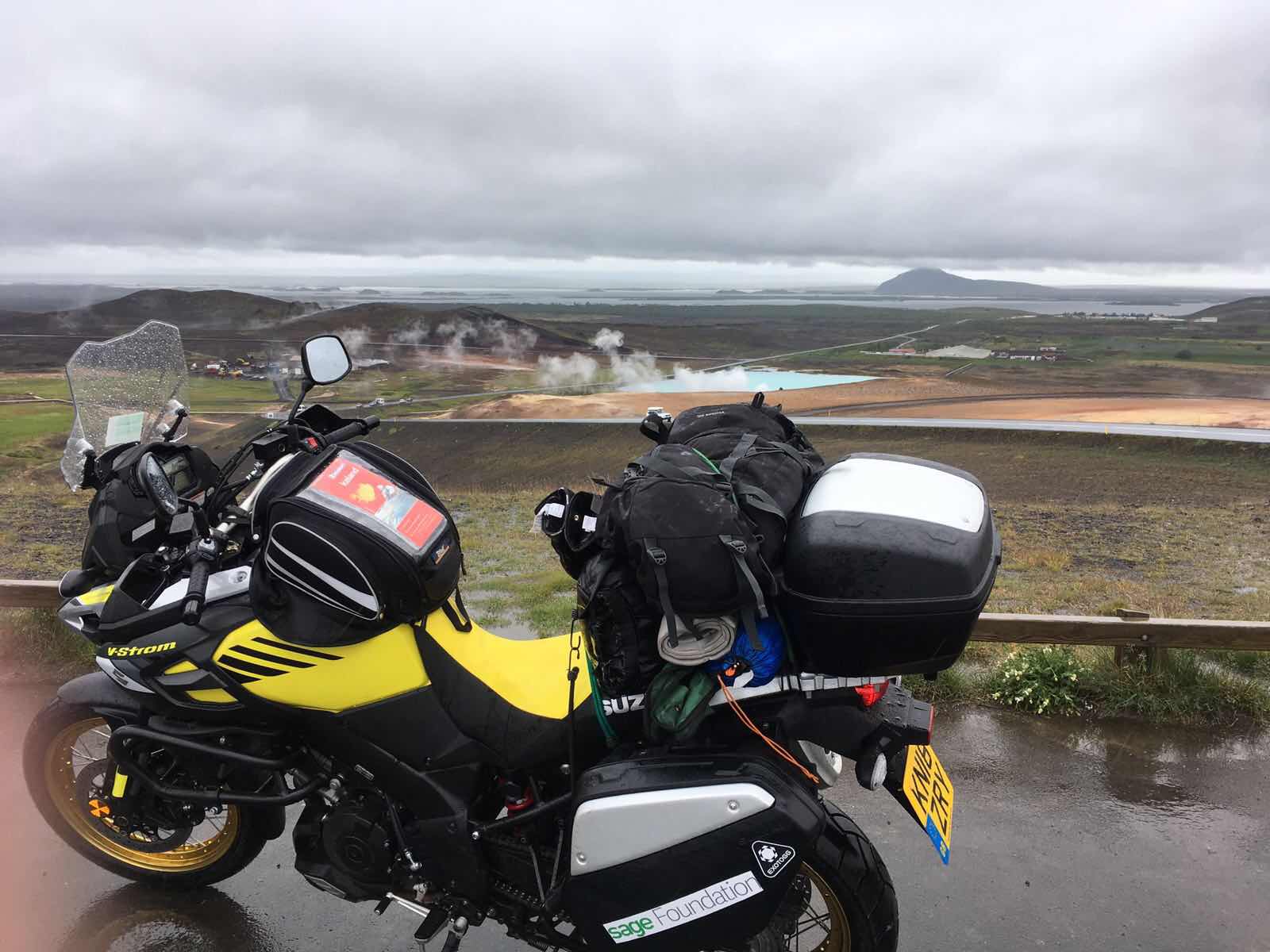 I can honestly say that today was one of the worst days riding I’ve ever had, and I’ve had some bad days. The wind never let up and at one  point I was riding at a 30degree angle  and getting blown onto the other side of the road. It was really scary stuff. I also had an air leak in my jacket somewhere. My hands were dry (thanks to my new gloves and headed grips) but my arms where like icicles the whole day.

300km later, after several mountain passes and a pit stop at a hot springs cafe for some goulash and bread, I was closing in on Dalvík, a very small port town in the far North of Iceland. I arrived with 20 minutes to spare, bought my ticket and felt a bit better about life.

Due to the battering I’d all day on the road, I opted for a hostel tonight to recharge my batteries and the batteries on my filming equipment, and also to get warmed up.

So tomorrow I aim for the Arctic Circle in Iceland. I have very few roads miles to do but after feeling pretty down today, I’m motivated and really to cross that line and add my second arctic circle crossing to my eventual goal of all 8. 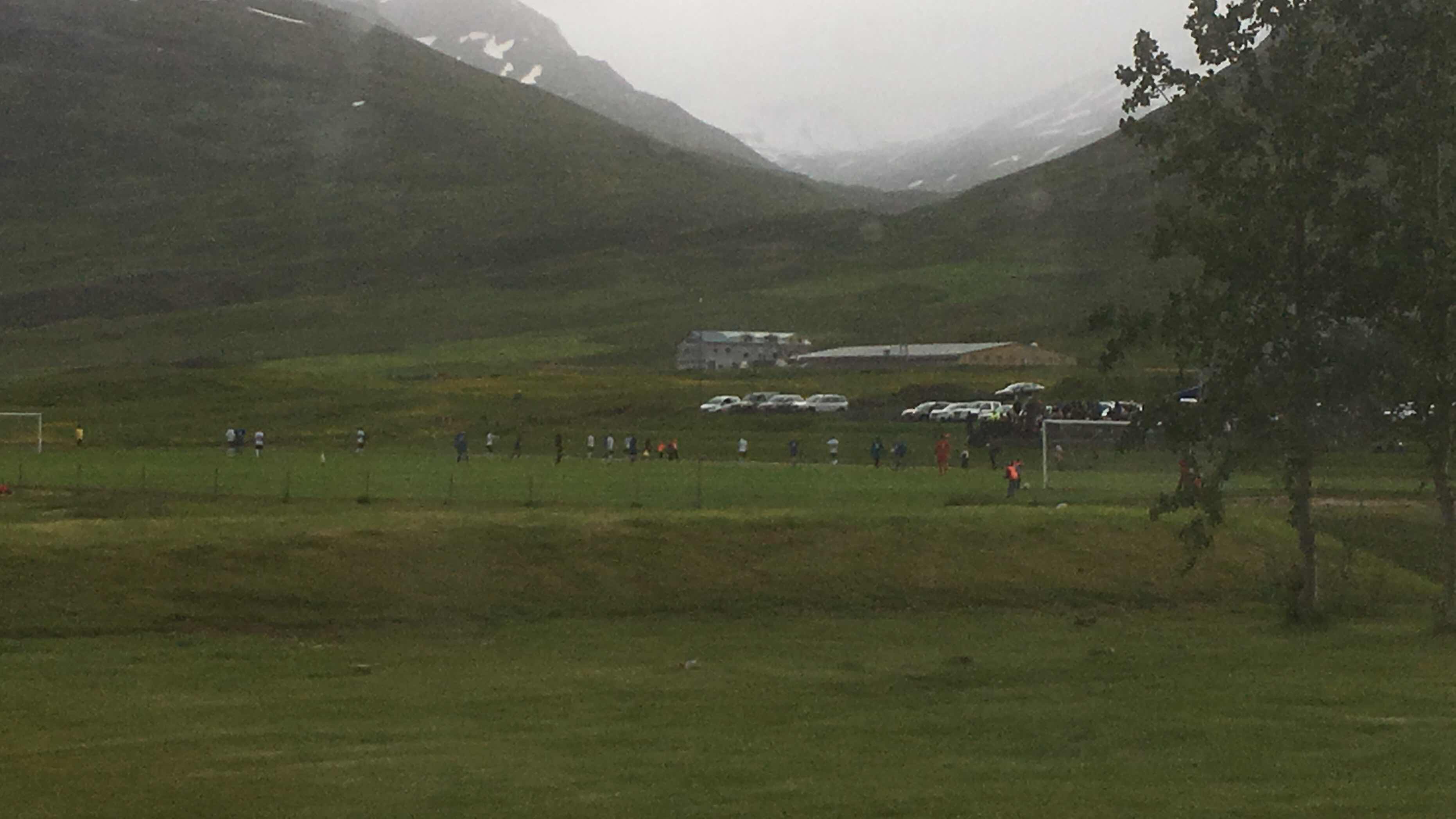 Thank you so much for all the encouragement on social media today. I feeling very demotived and generally narked-off, butall your comments really helped me get back on track.

Also huge  thanks to Steve Joice for his very generous donation and kind words, top man! If you haven’t donated yet you can still do so by following the link www.virginmoneygiving.com/thearcticrider

Thanks all for today folks.