Day 7 was another early start. I had to be at the ferry port by 8am to load the bike, so I was up at 6 getting my kit packed away, and making some porridge.

I arrived at the port, a few miles from my hostel, expecting a queue of cars, after being instructed to be there an hour before departure when buying my ticket, but there were no other cars just a few folk milling around. I was invited to bring my bike onto the ferry (ferry in the loosest of terms) and it got strapped down. I don’t think they get too many bikes and the V-Stein was placed  against the wall and just sort of belted to it. I grabbed my stuff and headed onboard. 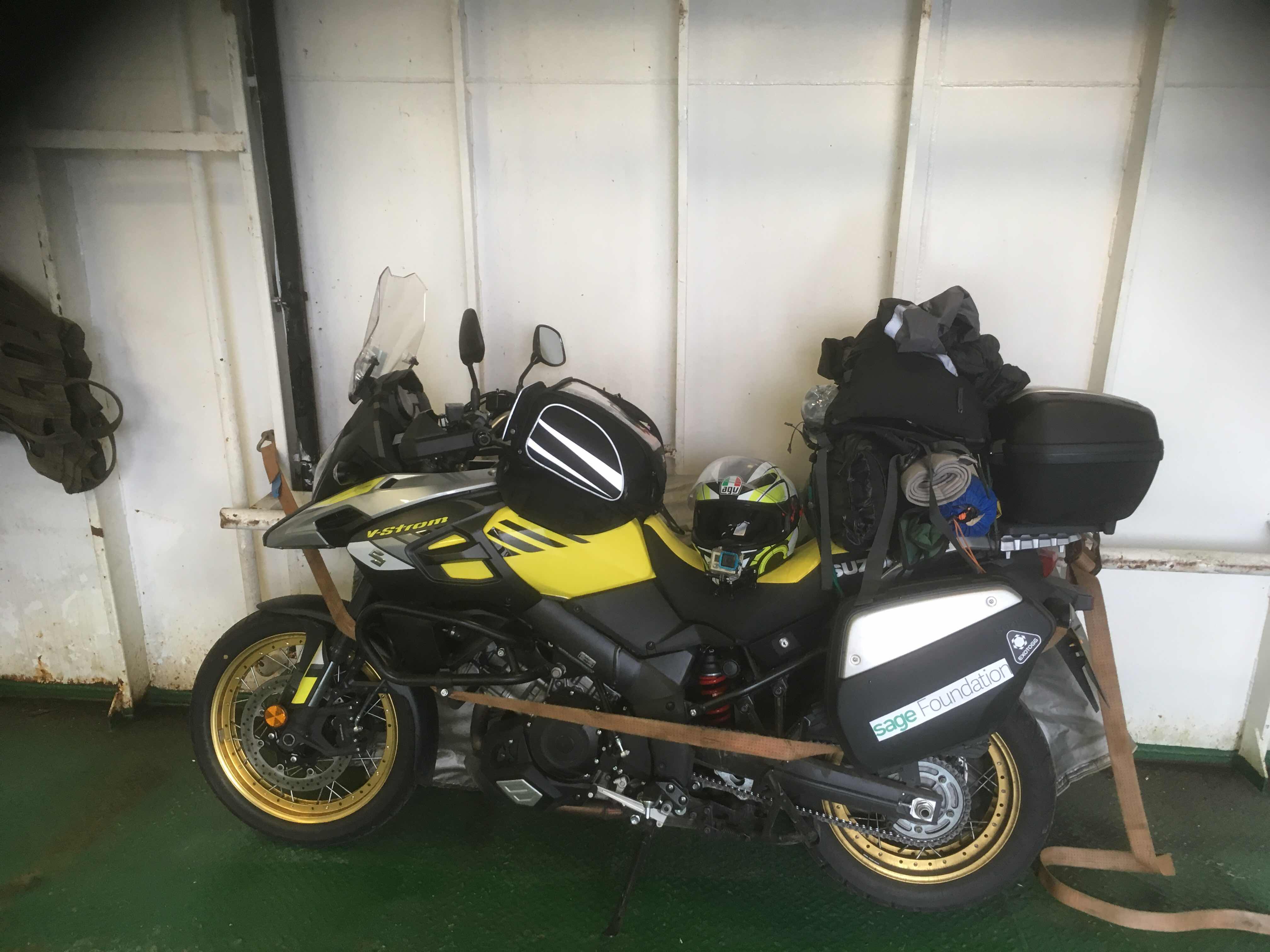 Before long another few dozen passengers had arrived and we set sail. There wasn’t a particularly strong wind but as soon as we got out into the Fjord I knew I was going to be an interesting crossing. I kept my mind off the swaying of the ship by listening to some podcasts and looking out the window but before long there was a child being sick into a bag next to me to I headed out onto deck.

Now some of you may know I spend 4 years at university in a special Royal Navy Reserve unit, meaning I have some old sea-legs from doing deployments on smaller patrol ships. The seas I encountered today were up there in the top 3 worst crossings. It got worse when we got out of the shelter of the fjord and had a side wind with some fairly rough seas as we crossed the North Atlantic.

I kept myself in the middle of the ship and looking at the horizon to keep any sea-sickness at bay. Half way through the crossing I needed to pop to the bathroom down-below. Being in full leathers and thermals I was down on the ship for a good 10 minutes meaning I’d been exposed to the severe movement of the ship. When I got back on deck, the smell, sight, and sounds of dozens of sea-sick passengers started to get to me. I found a quiet spot and turned up the volume of the iPod. I managed to not be sick but it was an unpleasant journey to say the least. 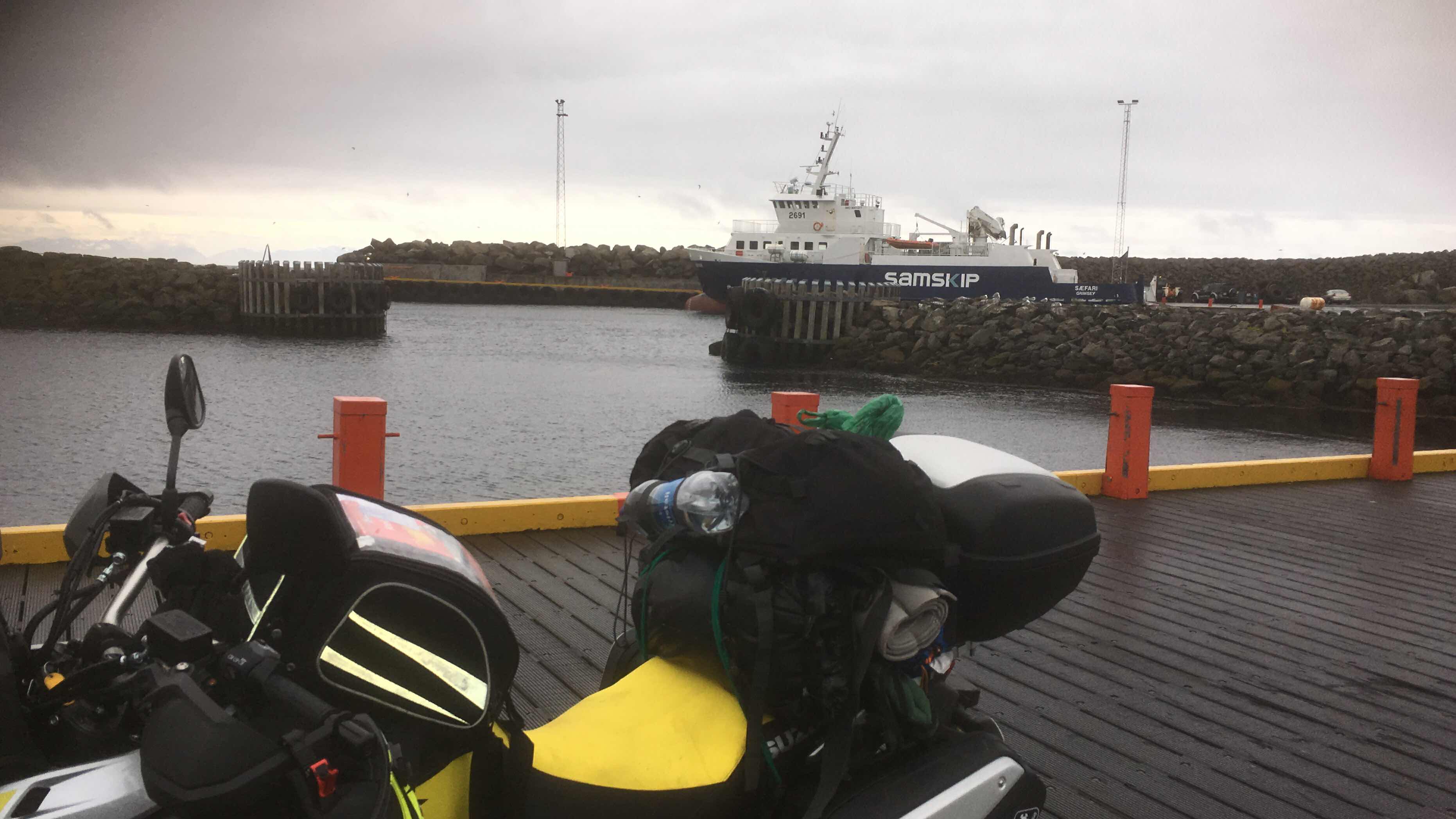 I rolled off the ferry (see photo above) and did a quick Facebook post beFore driving the few miles up to the Arctic Circle. Around 1pm I passed the Arctic Circle sign and stopped for photos... I’d done it. It was an odd feeling. I was really proud to have made it after the past few days of tough travel but as per my Nordkapp trip, there was also a feeling of loneliness and lack of purpose, now the goals has been achieved. 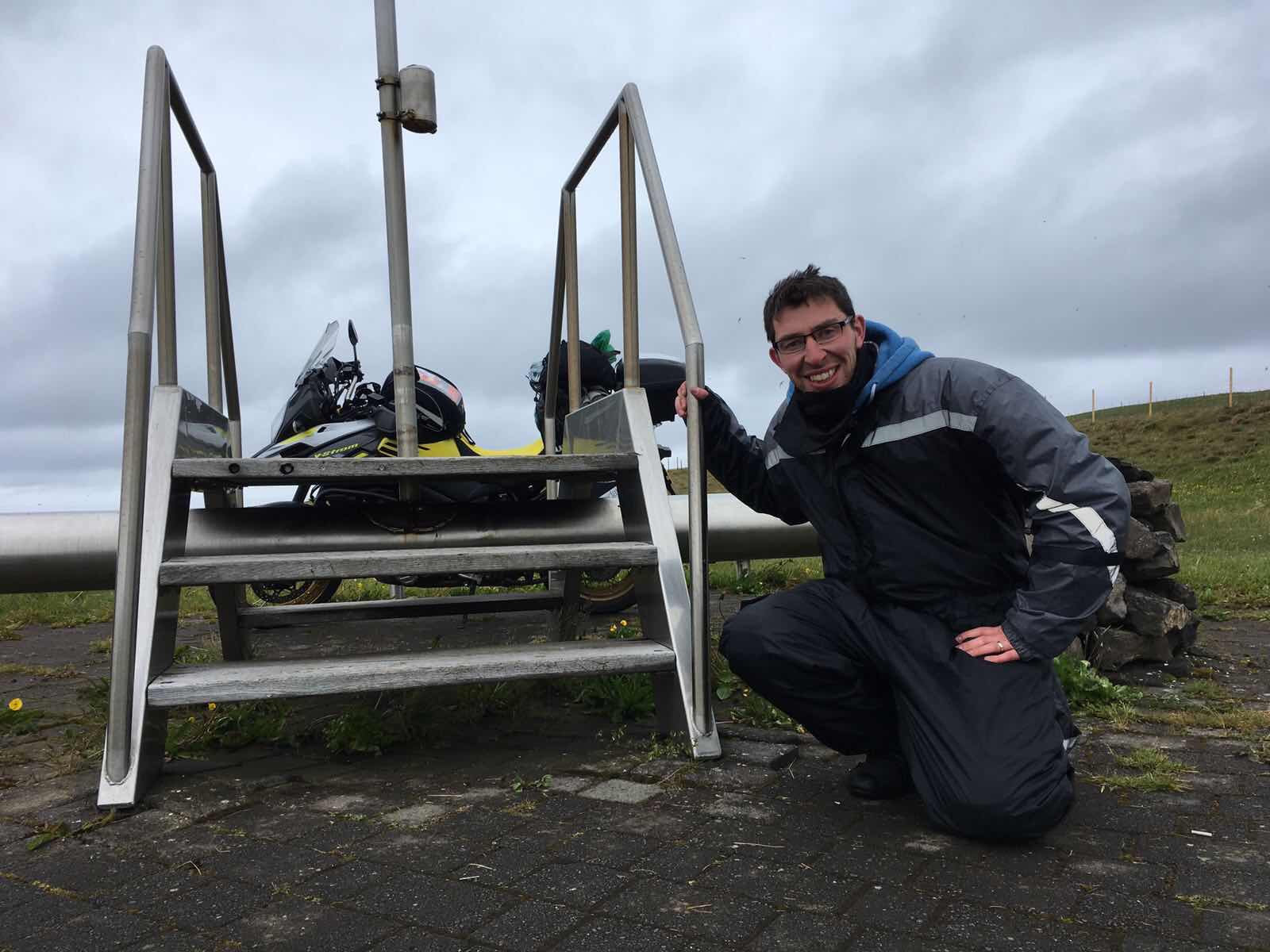 I decided to have a go at getting further into the Arctic while on the island. There was no more tarmac but there was a dirty track for walkers so I thought I’d see how the V-Strom got on. Big mistake, the path was narrow, pot-holed, and very steep. I wouldn’t have felt confident  doing this on an enduro bike let alone the big heavy V-Strom. Half way up, after getting stuck in mud twice and nearly dropppng the bike, I turned around and headed back. It was partly my off-road confidence and partly that I know if messed up, I was on an island without a doctor or mechanic, 3 hours by sea from the mainland, and I was a good few miles from the ferry.

I headed back to the port and popped into a bar to grab a lunch of French fries and Coca Cola (full fat) and warm up watching the football. They did have deep fried puffin on the menu, but I thought I’d pass on that on. 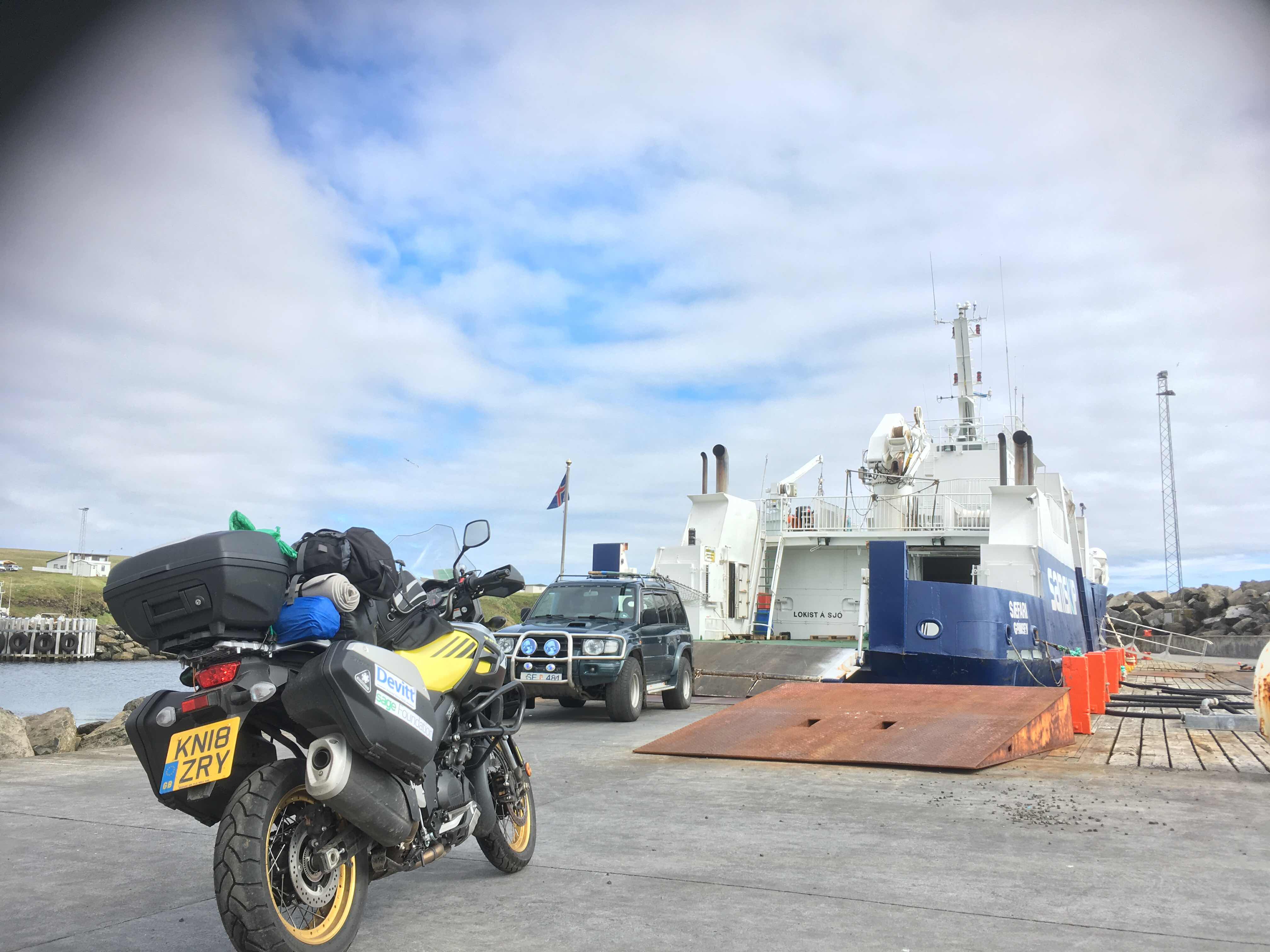 I looked around the rest of the island then headednback to the ferry.

The crossing on the way back was night and day compared to the morning. Very smooth and it was so sunny I had to put sun cream on to stop my face getting burnt. I spend most of the crossing chatting to an American couple from Portland about everything from Iceland and travel, to Donald Trump and Brexit.

When I got back on the mainland at 8pm local time, I was going to try and head South to Akureyri, but I was pretty tired so went North instead to the closer town of Olasafjorur and set up camp 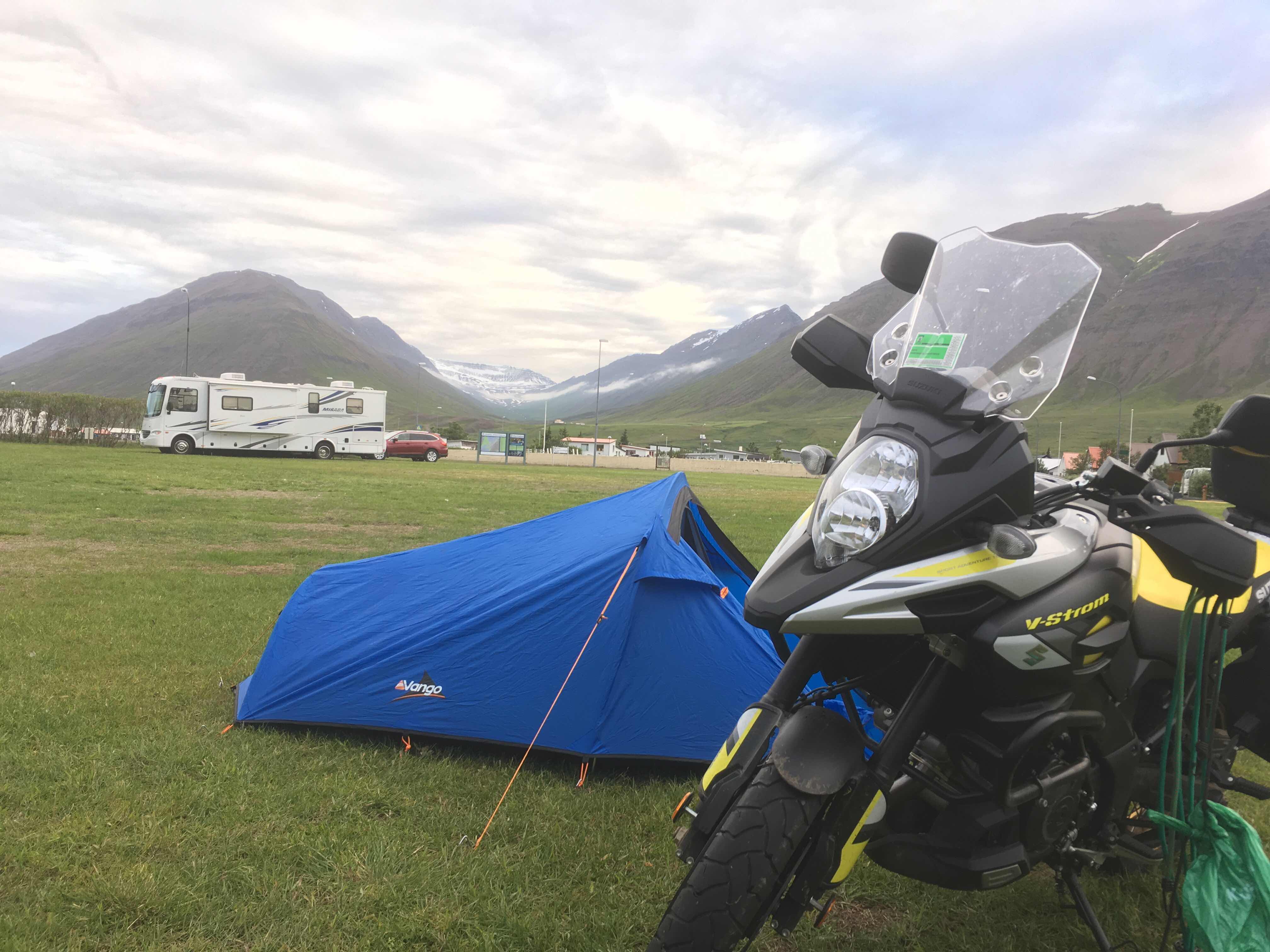 Another fun packed day for sure. Thank you again for the support and encouragement. I can’t tell you enough how much it helps. If I’m honest, even after such a major achievement it’s pretty lonely up here and I’m missing my wife and kids a lot, so you’re all keeping me going

Tomorrow I head West to the Western Fjords trying to avoid the rain. I have 5 days to kill before heading off Iceland (the ship only runs once a week) so I’m trying to enjoy seeing some of this amazing country.

Thanks for all the donations today too. Even though I’m completed my mission, you can still donate at www.virginmoneygiving.com/thearcticrider