Welcome back to the Arctic Ride 2014 blog. With the 'This time next year...' blogs over the past few weeks I feel like I've been blogging loads which has been so fun. I've done my first two potential routes home; Sweden and Finland and today I will talk about my final option home through Norway.

Now I'm not going to be boring and do the exact route back that I took to get me to Nordkapp. I've designed a slightly altered route which will see me stop at different places along the way home and take some slight detours. As with all routes, it depends on my progress up to Nordkapp, if I'm behind on my schedule I'll have to take the quickest route back, if I'm doing better than expected then I can take some more detours :) 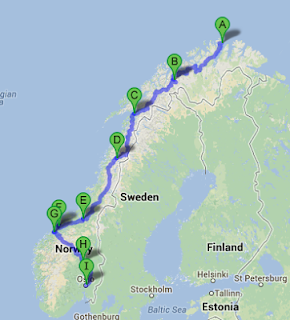 As with all my routes home I will start in Honningsvag. I will ride 265miles through the mountain roads to a 'town' called Olderdalen which has a small ferry port﻿. As well as a ferry port it has 261 inhabitants and has a grocery shop... I think this town epitomises the phrase 'back end of nowehere'.
The following day I will travel another 234 miles to a town called Bognes which has a small ferry port (are you seeing a theme here).
You can see the entire town in this picture and by the looks of it the ferry is bigger than the town. It looks as though I will be stocking up on supplies in Honningsvag before I start heading south.
The next day I will do another 200+ mile day heading back through the mountains and leave the arctic circle :( and spend the night in the town of Mo I Rana. Mo I Rana is home to the Arctic Circle Raceway which is the biggest race track in Norway. I hoping at this time of year it might be open as I would love to get the chance to test the Suzuki out on it.


From Mo I Rana I'll keep heading south along the West coast of Norway until I hit the familiar city of Trondhiem. From here, rather than heading straight South to Oslo I will head West into  Fjord ridden Western Norway. One of the main reasons for taking this route is to ride some of the worlds most amazing roads including... The Atlantic Highway.
After riding The Atlantic Highway I will stay the night in Molde before heading across central Norway to Olso via Lillehammer. From Oslo I will catch the overnight ferry to Denmark and then ride South to Germany and then onto the Netherlands. As with my other routes depending on how i am doing for time I will either ride to Calais and cross to Dover or get the Ferry straight from Amsterdam to Newcastle.
So that's it, route home #3. I'd love to have everyone opinion on my routes to see which you would most like to ride and which you think I should do. Watch out for a survey coming your way very soon!
Thanks again for reading and please keep spreading the word and following me on my social networks and if its just been payday and you can spare some cash please donate to a great cause. All links below:

Donations - With 100% going to charity Cerebra
CLICK HERE TO DONATE