This time next year...The Route home (2)

Thanks for tuning in.

So yesterday I blogged about my route home #1 through Sweden via Finland before heading into Norway and Denmark. Up for discussion today is the potential route #2 heading through lots more of Finland and riding through no less than 8 different countries :) My initial thought is that the guy at the post office is going to be pretty annoyed with me when I go asking for 8 different currencies... haha. 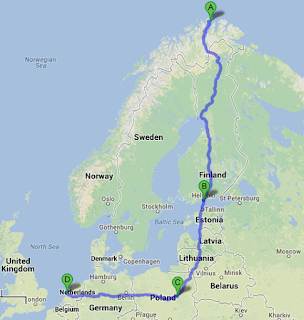 This route will see me ride south through Norway heading into Finland's Lapland region (I'm doing my best to locate Santa and his Mrs to give them my list). This route into Finland lies slightly further East than my potential route through Sweden as discussed yesterday. I will then travel the length of Finland until I finally arrive in capital Helsinki 4 days later. I will then catch the overnight ferry to Tallinn in Estonia which, after 2 weeks of camping in Scandinavia with their mosquitoes , I'm sure I will be pretty glad of.


From Tallinn I will ride south through Estonia, Latvia and Lithuania. These three ex-soviet countries will present me with some of the worst roads known to Europe and will take plenty of time to ride though which will automatically delete the rest day which is planned into route one. As I know from the experience of my 2011 trip, planned rest days are vital if I get behind at all on my trip which is always possible.

After Lithuania I will head West into Poland and ride the width of the country before doing the same with Germany. For this route, and due to my tight shedule, I will have no other option that to ride straight to Amsterdam and catch the overnight ferry back to Newcastle.

The good points about this route is that it will allow me to ride in 5 countries (Finland, Estonia, Latvia, Lithuania, Poland) I've never ridden in before and in some of the most challenging roads Europe has to offer which is great from a biking point of view. Also I will visit 3 countries I've never been to at all (Finland, Estonia, Lithuania) as well as some of the best cities Europe has to offer (e.g. Helsinki, Tallinn, Riga, Kaunas, Warsaw Poznan and Berlin). Also I'll probably save a few bob on petrol by riding through the eastern bloc countries rather than mainly in Scandinavia as route #1 would be.

The draw back are that this is a very 'Blue Sky' route in that there is really no room for error or to get behind on the plans. If I'm late getting to Helsinki I would lose a day as the ferry to Estonia is 6hours and to do that during the day would eat into vital riding time. Again if I'm late making it to Amsterdam and miss the daily ferry I don't then have the option time wise to ride back through Belgium and France and cross at the channel.

So that's route home #2 discussed. Over the weekend I will release my third and final route option so I hope you are excited.

Once I've blogged about them all I will cast a vote to all you readers to see which you would like me to do and base my decision on this and a few other factors.

Thanks again for reading. Please share what I am doing with others and if you have a spare few bob please visit my donations page or get yourself some Arctic Ride merchandise.