So the reason why I am combining these two is because of them will be a rest day. Like with my other rest day, if I am behind with my miles for any reason, I will push on and keep going. On my whole trip, I have three rest days which is not many but I am hoping I will be able to keep on track and use them to positive effect. I would like to be able to show people the trip through my eyes and explore Norway. I think about my little brother and the other children like him who are never going to be able to experience something as special as this trip and will never be able to have a driving license and I want to be able to show Robbie, my little brother what its like.

Day 10 sees me leaving Narvik and heading around 155 miles or so, all going to plan to Tromso, another place that I have never been to. :) 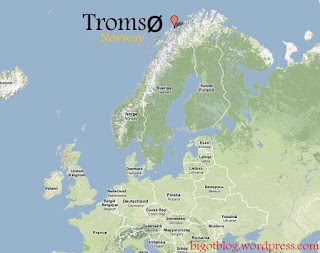 Tromso is the capital of the arctic and the second largest city and urban area north of the Arctic Circle in Sapmi (following Murmansk - Russia.) It also contains the most northerly university in the world..that's pretty impressive! :)

Tromso is a popular place for many reasons. There are quite a few attractions here which I will be having a look at on my rest day, like the Arctic aquarium with the bearded seal.. I think this is a must to see, an Arctic Cathedral, museums, and the science centre of Northern Norway. It is also good for skiing (apparently) and so there are some cable cars I can have a go on too! :)

One of the other things Tromso is famous for is linked to a topic I have discussed before, the amount, or should I say lack of night and day up in the Arctic Circle. Tromso has a midnight sun from 18th May to 26th July and so I will definitely have to take an eye mask with me! Twilight in Tromso is long which means that there is no real darkness between late April and mid-August. The polar night is from about 26th November to 15th January. Unfortunately, or maybe luckily, I will not be here during this period. Although, this is a reason why Tromso is famous.

It is in the middle of the Aurora Borealis zone, or northern lights zone, something I have not yet seen, but hopefully will one day. :) Because its in the middle of the zone, this means that it is one of the best places to see the Northern Lights and this can be seen between 6pm and midnight but isn't visible between late April and Mid August.

Northern lights aside, it seems that Tromso is going to be great place to visit. :) Doing these blogs is really making me look forward to my trip and the more I explore these towns and cities, the more I hope you are wanting to follow me on my journey :)

I will also be close to my destination of Nordkapp and only a few days away. I will also be almost half way though my trip and probably starting to miss home and my family. But what will keep me going is the fact that people have believed in me enough to sponsor me as much as they feel able. If you would also like to sponsor me, please visit www.virginmoneygiving.com/arcticride2014 All money will be welcomed by the charity, Cerebra.

If you are reading this and not following me on twitter, please do. @arcticride2014

That's is then for day 10 and 11. Please visit again tomorrow for the next instalment :)