Hello,
Wow, how is it day 14 of this trip already! That 2/3 of my trip done. On one hand it feels like only a few days ago I had my great send off from the lighthouse! But at the same time when I speak to Kirsty it feels like I've been on the road 2 months, not 2 weeks!
This morning I took the exec decision to head South via Norway rather than the planned route through Sweden and Finland. This was taken due to the weather. Norway was forecast to be dry and sunny, the other route thunderstorms for 2 days. Even though the Sweden/Finland route is the know 'quicker' one and I'm on a time limit to get home, I knew I could make better time and enjoy it more if I went through Norway. I consulted Kirsty and some Dutch bikers I met at the Alta campsite and came to the decision. A key factor was also my love of Norway. Easily the best country in mainland Europe :P 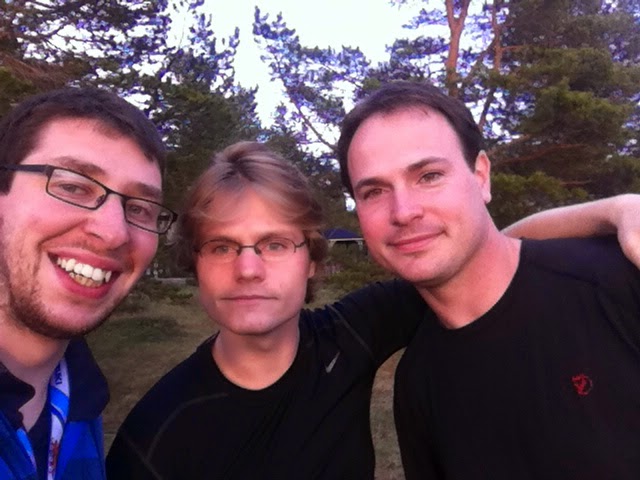 This route would mean 3 BIG days down to Trondhiem to keep on schedule. So I got an early start and was on the road by 8am ready for a 500km day on the twistiest roads known to man (I'm not complaining by the way). When I saw the first sign that said 'Narvik - 511km' my heart sank a little thinking this would be a long day.. But after clearing the roadworks south of Alta suddenly I was back in the dream I'd been having about Norway for the past 14 months.
Open road, twists and turns, mountain passes, sun, blue sky, and no traffic.. All on my motorbike. I think the pressure of getting to Nordkapp has capped some of my enjoyment of the trip in the days leading upto me making it there as I was so afraid to fail. But free from those shackles I was in my element. 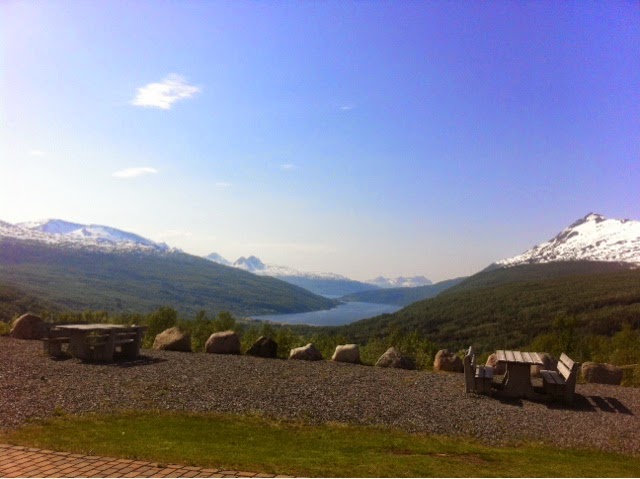 For me, my bike is a place of great solice. It's just me and my helmet, and I do a lot of thinking in there. Today I realised that I'm where I want to be. I've got a perfect wife a home who understands and supports my passions, I'm about to start my family, I like my job, I've just achived the biggest challenge I've ever set myself, I'm met some great new friends, and I've been supported by my family and true friends back home! And to top it off, I'm riding the bike of my dreams. Since I was 12 or 13 all I wanted was a blue Suzuki sporty touring bike. To some it might just be a little 650 but to me, it's my steed, my companion, my bike! Long may this feeling continue.
The miles just flew by and in no time I was in Narvik again! I got there just before 5pm as I needed to change some Swedish money to Norweigen after the route change. Unfortunately the banks all seems to shut early so I missed out!
Since I had stopped I went for a wonder round the town but I was getting lots of funny looks in the street and in the shop where I bought some coke. Now it might have been 25degrees and yes I was dressed in a leather bike suit but surely they can put two and two together and I get I had a bike and that I wasn't doing it for the fashion!
I went to get back on my bike via the toilet at a mall. When I was washing my hands I looked up at the mirror to discoverer why I had been getting those funny looks. It has been such a nice day that I had ridden the whole way with my visor up. Mix in bugs, dust, and sun cream and you only get one result. 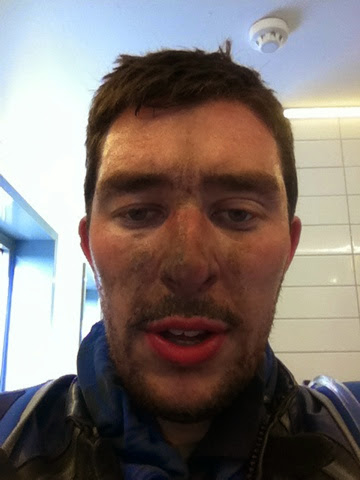 This photo was me AFTER 5 minutes washing my face. You can only imagine what it looked like before.
Anyway I went to find a campsite. I had stayed in one a few days agonaroudn Narvik but was left that impressed. The the wifi connection was poor and I had to pay £2 for a 5 minute shower with little pressure or clean changing facilities (the joys of camping).
So I headed south of Narvik presuming there would be a campsite the otherside of town... WRONG! 45km later I came across a camping place which, so far, has set the standard pretty high... I'm getting worried that after listening to the Alan Partridge audiobook on this trip I'm sounding more and more like him... Or do I anyway?
So that's Day 14. I'm now camped by some water with mountains on the background :D 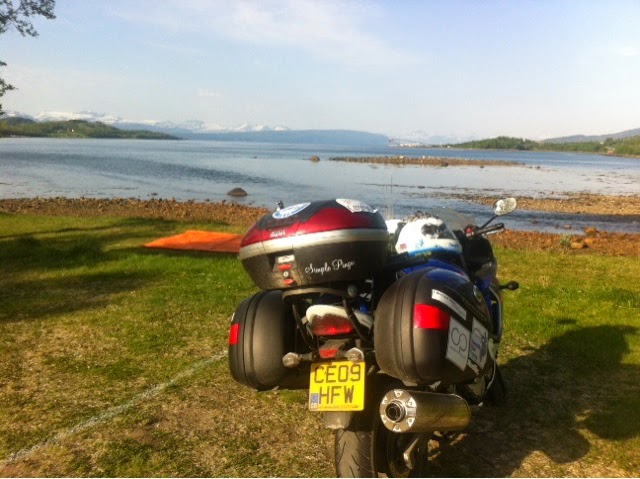 Many thanks for reading and supporting me.
You can still donate via my giving page at www.virginmoneygiving.com/arcticride2014
Until tomorrow.
Ride safe.
Gordon
Email Post