Hi everyone,
So it's Day 21 of my trip and I'm almost home, almost. When I'm back (I've still 10 miles to do once I get off the ship in the UK) over the weekend I'll do a full blog reflecting on the trip. 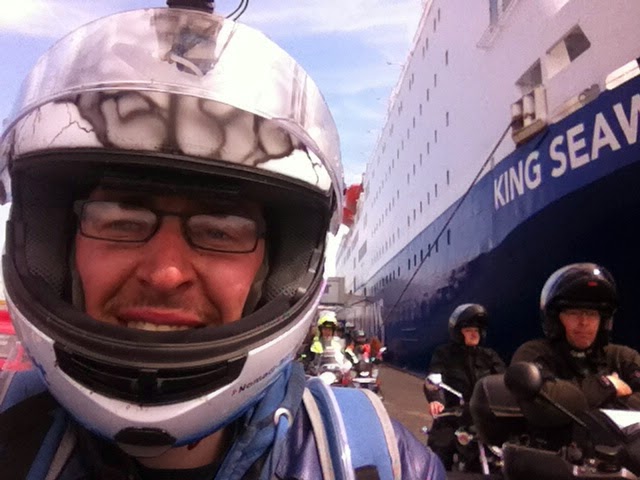 Im on my final ferry now, sailing back to the UK, due in tomorrow morning into North Shields. I'm still taking my adventure in. It almost doesn't seem real that I've been on the road for 3 weeks, made it to the Arctic, ridden to Nordkapp, and home again.
But I think it hit my body. I got to my cabin (VIP - provided complementary by DFDS Seaways) and has to sit down. I'm so tired, both mentally and physically. My whole body is sore, my mind strained from the concentration of being on the road for so long. But at the same time I feel on top of the world.
I've done it... I've bloody done.
Today started as most have on this trip. I awoke to sunshine, got myself up and started packing my tent. It felt odd this was the last time (for while at least) that I would be rolling up my sleeping bag, taking out my tent pegs, and stuffing my life onto the back of my bike. 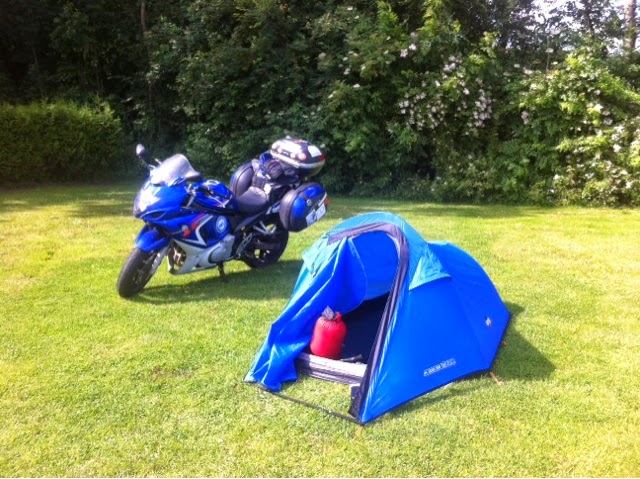 As I put my leathers on I felt a bit sad. There is a massive part of my soul that is filled with everything motorbikes. I can't walk down the street and hear a bike without looking for it and staring at it. So I took a moment and sat in the warm morning sun. I only lasted about 2 minutes before overheating so I jumped on the bike to get some cool air to my face... The downside if leathers.
I went to the first petrol station I could find and filled up the tank one last time. And boy is Netherlands expensive for fuel... It's worse than Scandinavia! After doing the maths I paid £1.83 a litre... Wow!
In my annoyance I set off and took a wrong turn and started heading North East... WRONG WAY! After turning around I headed towards Amsterdam.
Again the traffic was heavy but the miles disappeared as I thought about home. As I approached the city I pulled over for a spot of lunch where I treated myself to my FIRST McDonalds of the trip. I checked google maps and found I was still 2 hours from the port with traffic so I best get a move on I thought.
Buzzing through the traffic I joined several German bikers who were clearly on the way to the ferry too. When I arrived I checked in, did passport control and parked up.. Suddenly I looked ahead and there was a ton of bikes... It was like a bike meet. 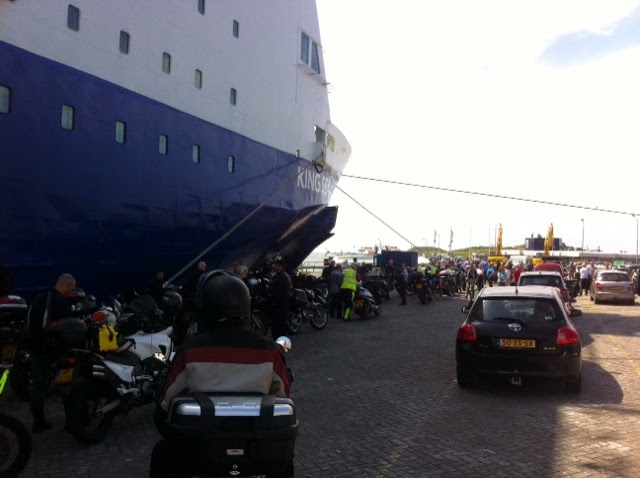 Still having an hour or so to wait or the ferry to load up I had a wonder and loom at the bikes and counted no less than 50 Bikes! I know it's a big ferry but that seemed excessive... Considering there had been just 6 on my last ferry! 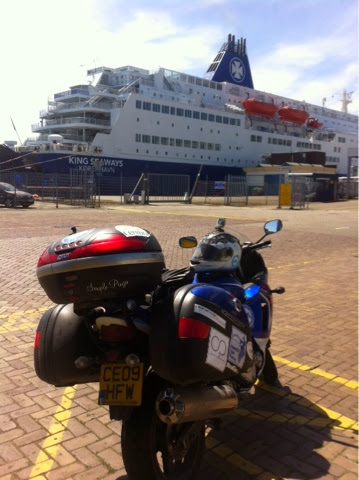 After some waiting in the sun I rode onto the ferry and took my place! As with my first ferry from Dover, I had to strap down the bike myself, and I'm not really an expert on this but I did the best I could. We'll see in the morning if I did a good job or not. Having worked as a deckhand for the afternoon I'm looking forward to my pay-cheque from DFDS later in the month :)
Seen as it's my last night I thought is treat myself to either a burger of pizza... I'm still to decided.
As promised in yesterday's blog, here is what happens to my helmet yesterday. Basically the flip part at the front of it (designed to be flipped up when paying for petrol or during accidents) fell off at one side as I was approaching my campsites. Upon further inspection it seemed a bolt had come loose that hold this in place so I promptly reinserted it and tightened it. I'm not sure how it happened, I've dropped my helmet or anything but maybe it was loose and the constant pulling it on and off had loosed it more... All fixed now.
So that's Day 21. Nearly home and very tired.
Thanks again for reading and look out for the next blog where I sum up the trip and tell you about my final (but short) day tomorrow.
Ride safe.
Gordon
Email Post