This time next year.. Day 9

So..day 9.. I will be in the Arctic circle and continuing to travel north. I've had a look at the temperatures and as I'm getting further north its getting colder. The average temperature for May..which is supposed to be summer, is 4.5 degrees Celsius! I have been chatting to a few #bikerbuddies about ways to keep warm and thanks to some of u for getting back to me from the last blog, I have some links now and will have a think about what might be the best products to buy. if anyone else has any suggestions, I would be more then happy to hear them! :) I also have to make sure that my bike can take the power of all the heated equipment I would like to take with me, and of course the fact that, as I am going to be alone, I have to pack smart.

I said before that I will be leaving the large towns and cities behind and will be stopping at more villages which could be quite worrying. However, I am now eating my words because I have just realised that today, once I have set off from Rognan and travel around 174 miles to the CITY Narvik.

And not just that, its the third largest city in the county of Nordland with a population of 18,473 at last count and possibly give or take a few!  I'm going to a lot of places on the next trip that I didn't visit on the last one because I am taking the route up the West Coast of Norway instead of the East Coast of Sweden. Just to put it in context of where it is: 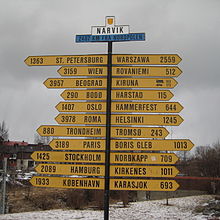 This piccie above does have have Nordkapp on it.. 709km away but no Newcastle upon Tyne... how rude.. ha ha

One of the main industries developed in Narvik was connected with the iron ore found locally. I have been reading that a company in Sweden wanted this and so built a railway that leads from Narvik to Sweden solely for this purpose. It also has the largest harbour in Northern Norway which probably helps! It is located 140 miles inside the Arctic Circle.

Skiing is also popular up here with all the mountains and snow which can be there even in May..although luckily for me I wont be driving up any (or at least many) mountains on my bike so should be ok! I cant actually ski but if I could I guess it would look like this: 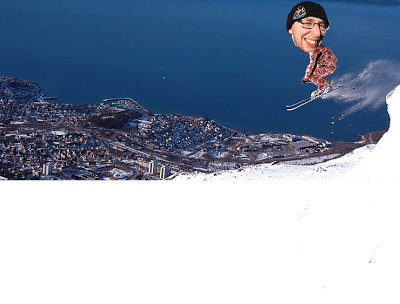 This is actually a real person skiing up in Narvik :) So apart from Skiing, what else can you do in Narvik I hear you say.. well.. there is plenty of hiking to be done, a cable car which looks like a must, salmon fishing, some beautiful fjords to explore. 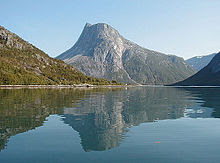 One final fun fact I found out is that, although there is a train station in Narvik, this is the most northerly place you can get to by train and no trains go north from Narvik. So train spotters, this is your final destination ;)
That's it for day 9 :)
I hope u have been reading about my reason for doing this trip :) I am raising money for a charity called Cerebra. They are a UK only based charity who help out families of children affected by neurological conditions by offering support and equipment which may improve the quality of life of these children. Unlike other charities, they are not helped by the government and so fully rely on its supporters. They have helped my family a lot and do not hesitate in their giving. All the staff who I have encountered are also very giving with their time and patience and make you feel as though you never ask a stupid question. I am trying to raise as much as possible.
I understand, and feel the effects of the current or at least recent recession but charities also feel this too and so if you are able to give even a quid or two, or dollar or two to the cause that would be awesome. It goes straight to families. I have been talking to other families about the support they get and hoping to share more of this soon. If you want to know more about my little brother then please watch my video: http://www.youtube.com/watch?v=KdOg1O2o1m4 and if you would like to sponsor me and cerebra please go to www.virginmoneygiving.com/arcticride2014
Until tomorrow,
Ride safe,
Gordon