So day 8 is an exciting day.. I will officially be within the arctic circle from today for around the next 10 days, depending on my actual route back... :) I will have reached my first big hurdle and will actually within the ARCTIC CIRCLE...woop Will be a great day and a great achievement.

I must say that it will take me 60 miles to reach the arctic circle...but u get the point..its going to be an exciting day! :)

Day 8 will see me leave Mosjoen, a city and finish the day around 147 miles later in a village called Rognan, Norway.

I've put a map which also contains Nordkapp so that you can see how close I am getting to my final stop (on the way there anyway).

Rognan is a 3km village with a population of 2,526..but hopefully it will have a McDonald's for me to stop off at and have a quick munch! 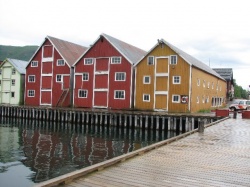 It looks like a small place but magical and very Norwegian. There doesn't seem to be much there apart from some shops, a train station, a church and a museum. What is worrying is that all the pictures I have found is when they are covered in snow....eeekk..lets hope its not like this when I go.. 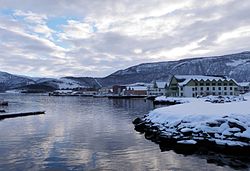 I have been thinking more about the temperatures up in Northern Norway and chatting to some #motochat guys from the US and am now exploring the idea of heated trousers..or pants as the Americans say and heated jacket liner. I already have the use of heated gloves and socks if my good buddy Bernie is going to lend them to me again :) If anyone has any suggestions of essential kit that I might need, then please get in touch. I'd like to hear from others on how u have coped being in cold temperatures.

I'm also getting closer to the most northerly point in Europe..Nordkapp..I was gonna go whole hog and go to the North Pole but I figured the Suzuki probably wouldn't appreciate that! ha ha

Keep checking back for the next instalment and follow me on my journey :)