Day Fourteen - Half way through!!

Well..someone clearly wasnt keeping their fingers crossed enough because Gordon has been driving today in horrendous rain to the point where even his power ranger suit did not shield him! Instead it ended up letting the water in through the zip and as he put it 'got my crotch really wet'..yeah yeah sure it did! It did, however brighten up when he got to his destination and he is currently in a campsite of no name..lol..in the suburbs of Gothenburg. So yes, he is still in Sweden..i think he must have got a good deal on the currency as he is spending a lot of time there!

We are now half way through the trip and so I thought we would pause for a moment and I could give you the top 10 fun facts that I have learnt about Gothenburg from Gordo-pedia and a wee bit on the intermaweb:

1. That famous pop group Ace of Base were from Gothenburg
2. Gothenburg is twinned with Oslo in Norway, Gordon's destination in a few days, Aarhus, where we went on our deployment and Lyon in France, where we have never been..lol
3. 9% of the immigrants in Gothenburg are from Iran..yes i dont know why specifically Iran either..thoughts on a postcard about that one
4. One for all you nautical folk, Gothenburg harbour is the largest harbour in Scandinavia
5. One for all the girls, it has the largest shopping centre in Scandnavia..I think I will be the judge of that one!!
6. Gothenburg is the home of the Volvo..which explains why they are all driving around in estate cars..lol
7. It is the second largest city in Sweden, after Stockholm
8. Everyone there speaks English..as demonstrated when Gordon went into the supermarket and the guy literally laughed in his tired face when he asked if they spoke English..and said that of course they do..its Gothenburg!! lol
9. There are no reindeer in Gothenburg..or if they are..they must be masquerading as volvo factory workers
10. There is one, yes one, Cockney fella that works and lives there and luckily for Gordon this guy came over and spoke to him today when he was having a rest.

Today also saw Gordon go to FOUR different Macdonald's..no Ikea's yet but FOUR macdonalds..maybe he will be better off rolling back home rather than riding back!! LOL He claims that he went in there to 'dry off' and i suppose that the burgers just happened to drop into his mouth..lol..

The plan for tomorrow is to travel to Moss, 40km south of Oslo and the home of the airport that I will be flying into on Thursday of next week..can i hear a woop woop? no...just me then! It will also see him leave Sweden for Norway which will be exciting! :D

As for the donations..there have been some very kind souls who have now taken Gordon up to £1202.00 and I would like to thank them very much!! As there are still people who have mentioned that they would like to donate, I would say please please do as EVERY penny goes straight to help children with brain injuries and their families.. the amount of love and support he is getting is definately helping him to carry on, so please continue to help him on his journey which he is now half way through! 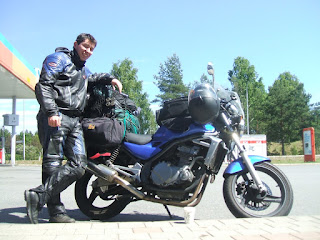