Day Twenty One - Please pass me that towel..

Today saw Gordon driving for the first time with not only all of his stuff but also with me! Now..I am not professing to be very athletic but the main skill that was required was of some sort of magician's assistant..i think this would have come in very handy if I could have squeezed into the top boz..but alas..i missed that class at school and so I adoned 7 layers including the power ranger suit and we set off from Moss to Oslo. The plan was that it would take around an hour which meant that we wouldnt be travelling for that long..however, 'Gord Gord' sat nav was not working and we missed the turning for the motorway and so instead of it taking around an hour...it ended up taking us more like 4!!

The weather was horrendous and it was really heavy rain for the whole time which meant that when we actually arrived in Oslo i resembled something more like a lion and due to the amount of layers i had on..it looked like i had go hungry on the way and eaten my cubs!! LOL My poor uggs survived..just and have lived to tell the story another day..phew!

The roads are quite amazing out there and there was a constant overwhelming smell of christmas trees which was cool..expect for the fact that we are in June..and the ground was full of foxglove..no no there arent lots of foxes walking around going..now where did i leave those gloves again..the flowers..so the scenery was ace which took away from the feeling that my skin was more wrinkly than ever from the rain! Although, positive of that was that now I know what Gordon will look like as an old man!! ha ha

After drying off and munching some yummy Swedish chocolate we decided to hit the town and go and explore the sites..we were hungry and opted against paying £27 each for a pizza and went to the only place (that i thought) was reasonable and visited macdonalds..to my horror..however, they still charged us £20 for 2 meals..or maybe more..i dont even want to think about the exchange rate! lol

We visited the ice bar too which was great fun and a picture of us there in our capes is below.. the thing that really struck me about Oslo is that instead of the 'youths' wearing adidas of nike like ours do..they wear big bright helly hansen jackets..well i suppose they can be sensible and cool..lol.. there was also one guy in just shorts and a vest top which was scary considering it had and was raining for the 24th hour straight!

On the charity side of things, we are now up to £1207 which is awesome and thanks to everyone who has donated..and again if there is anyone who hasnt done it yet..please get on it..like a car bonnet..as they say in Geordie Shore..or just give a quid..either way..lol

That's it for now. 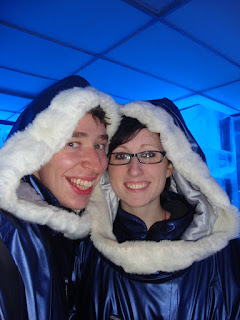