I know that Gordon has put a mini update on but since then we have had a chat on the phone. One issue we are starting to notice is that the further north he goes, the less phone signal he has which is upsetting for me (obviously) it may mean that I have to make up some fun stories for the avid readers of this blog..how about.he ditched his bike and rode a reindeer the rest of the way? No, ok will work on that then!

Talking of reindeer, so far he has spotted...NONE..this is very disappointing and I think that maybe they are scared of the bike..he assured me that they would be wandering about like some sort of snow white in the forest but not thus far..Reindeer watch will continue however in the quest of finding one..and not just tasting them..lol

Gordon has travelling further into Sweden and is now right on the east coast of Sweden and is 66 degrees north..for all those nautical types reading this..scary.. he said that he has noticed it getting colder the further north he is especially during the nights as Sweden is just coming out of a cold winter so the ground is still really cold..

The motorways are now long behind him and will not be seen again until around the Stockholm area on the way back down. Excitingly he saw a sign for a penguin zoo today which would be intriguing..i wondered how many types of penguin it had and asked if he was going to ppp pick up a penguin..but apparently he didnt think he would be able to smuggle it through customs! damn! He also went over the Kiel canal today which is a canal which we have both sailed down together, twice when on our navy ships so that's bringing all those amazing deployment memories to the forefront of his mind.

He is currently camped in Sweden (still) and claims he is on a hill and below is a picture of his area for the night tonight.

So, he has had two issues which he may need help with, and the question is..can you help...

1. His arse is numb..he requires a massage and someone to go and do it..all CVs and covering letters to me so that I can vet them..LOL
2. As he goes further north the nights are no longer nights and are in fact days. He said that last 'night' for instance the sun set at 1am and rose at 2am!! Although I did buy him a sexy eye mask..he has misplaced it..and so we need suggestions of what he could use instead to keep the sun out so that he can rest..answers on a postcard please! :D

Right, that's it for now. Tomorrow sees him travelling further in Sweden to Umea, yes i dont know where that is either..but if it has reindeer..i will let you know!

Ride Safe Gordon, I love you 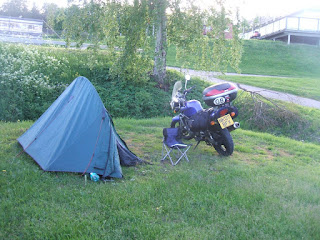